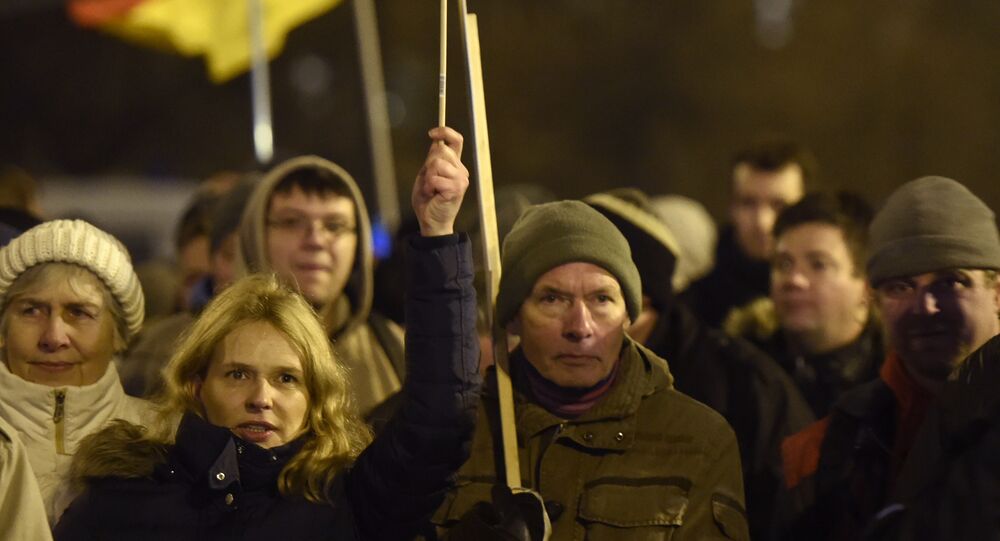 Head of PACE Monitoring Committee said Pegida's discontent over European immigration policies was the reason why the movement had organized a demonstration in Vienna.

"I think that Pegida will collapse soon. Given Germany's example we can see that they are already collapsing. However, there is the Freedom Party of Austria… We must fight the Freedom Party and its hostile policies toward foreigners," Schennach said.

Unlike the relatively young Pegida movement, Austria's far-right Freedom Party has been gaining a foothold in European politics for years. During the May 2014 European Parliamentary elections the party, which opposes Muslim immigration, gained 20 percent of the votes.

Schennach said that Pegida's discontent over European immigration policies was the reason why the movement had organized a demonstration in Vienna. The first Pegida demonstration in the Austrian capital took place on Monday.

© REUTERS / Fabrizio Bensch/Files
Former Pegida Movement Leader Starts New Organization
"Of course, there are discussions on the integration policy. Our integration policy can be good and can be bad. But the most important is to focus on education policies," Schennach said, adding that Austria should create an education system that offers career opportunities for both Austrian nationals and foreign residents.

Pegida was founded in Dresden, Germany in October 2014, and is known for organizing weekly demonstrations against the Islamization of Europe. The organization is not just focused on immigration, but also on foreign policy and other issues.

Pegida founder, Lutz Bachmann, stepped down from his post on January 21. The organization's deputy leaders and three other senior members also quit, saying that they did not want to be associated with "right-wing comments". Earlier, Pegida members repeatedly stated that the organization wanted to present itself as a civil group, and expressed concern over Western media claims that Pegida was a neo-Nazi movement.