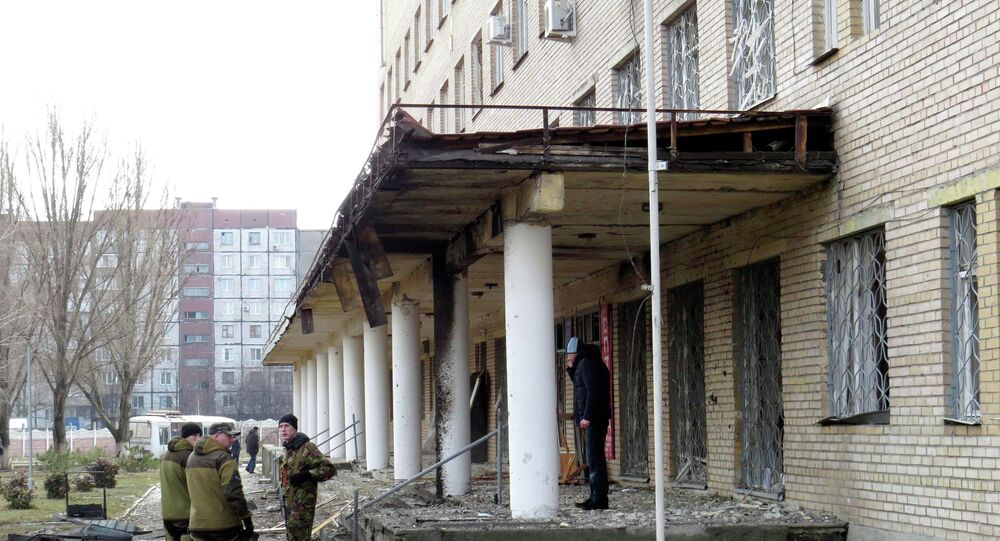 A shell hit a local hospital in the eastern Ukrainian city of Donetsk, killing three people queuing for the distibution of the humanitarian aid, one person standing near the building and one inside the hospital.

“According to initial information, four people died. One of them was standing near the hospital, the three others were queuing for humanitarian assistance that was being distributed outside the hospital,” DPR emergencies minister Alexei Kostrubitsky said.

Local media suggest that one more person died in the hospital building.

According to the self-proclaimed Donetsk People's Republic's defense ministry, Ukrainian armed forces are shelling from the area near the city of Mariinka, deputy head of the DPR forces Eduard Basurin said.

© AFP 2021 / VASILY MAXIMOV
Kiev Forces Reinforcing Front Line, Strikes Against Donetsk Intensifying
The city council said in a statement earlier in the day that the Tekstilshchik district of Donetsk had been shelled at noon, and one of the shells landed at a local hospital.

The council added also that power lines had been damaged and the district was without electricity.

Eleven educational facilities have been destroyed in the capital of the eastern Ukrainian self-proclaimed Donetsk People’s Republic due to shelling in the area on Wednesday, the city's administration reported.

The City Hall said six schools and five kindergartens have been destroyed as of 1:30 p.m. local time (10:30 GMT).

According to a local news site, the district has been shelled during 3 hours.

In January, local militia said that Ukrainian forces began shelling residential areas in the Donetsk Region. On the same month, dozens of civilians were killed in the southeastern city of Mariupol. Kiev forces and independence supporters have traded blame for the attacks.

In a statement issued by the OSCE overnight into Wednesday, current OSCE Chairman Ivica Dacic called for a temporary truce in the Debaltseve region in eastern Ukraine to enable the evacuation of civilians.

Despite the ceasefire deal inked by Kiev and independence supporters in September 2014, hostilities continue in the war-torn eastern Ukraine. Violence has intensified in recent weeks, with both sides trading blame for shellings, driving up the civilian death toll.
The Human Rights Watch (HRW) said on Tuesday that at least 341 people, including 71 women and six children, had been killed in hostilities in eastern Ukraine in January.
...
Reddit
Google+
Blogger
Pinterest
StumbleUpon
Telegram
WhatsApp
47
Topic:
Situation in Ukraine After Ceasefire Agreement (450)