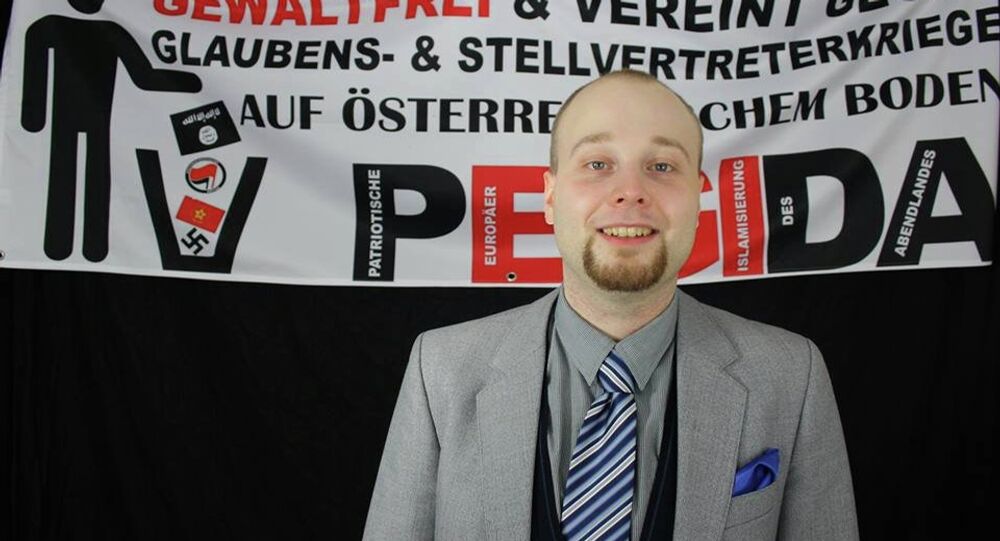 Organiser of the Austrian wing of the German-based anti-Islamist group Patriotic Europeans Against the Islamization of the West (Pegida) Georg Immanuel Nagel said that PEGIDA wants "true democracy."

"We are not satisfied with the paternalistic policy of the state, which allows the ruling upper circles to make decisions disregarding the position of citizens. We want true democracy," Nagel said.

The first Pegida demonstration in the Austrian capital will take place Monday. Nagel said that preparation for the demonstration started about a month ago, and that the rally has been coordinated with local police.

"At the moment we can see that we have an impact on the public discourse. Our interests are considered. And we can definitely increase our pressure," he said.

Pegida is unhappy with Western immigration policies as well as with what it claims is a lack of democracy in Europe.

© REUTERS / Fabian Bimmer
German Right-Wing Eurosceptic Party Restructures, Touts 'Professionalism'
Nagel told Sputnik that the organization is not just focused on immigration, but also on foreign policy and other issues. Pegida supports Russia in its stance on the Ukrainian conflict.

"We condemn US policy in Ukraine and other parts of the world, focusing on war. I think that the majority of Europeans do not want this escalation policy. We want good relations with Russia," Nagel said.

Pegida was founded in Dresden, Germany, in October 2014, and organizes weekly demonstrations to bring attention to what describes as the Islamization of Europe.

Every week, the reported number of participants increases, with its January 12 rally said by some to have been attended by over 25,000 people.

Nagel stated that the Austrian wing of Pegida will not only hold rallies in Vienna, but also in other Austrian cities, promising that their demonstrations will soon sweep Europe.