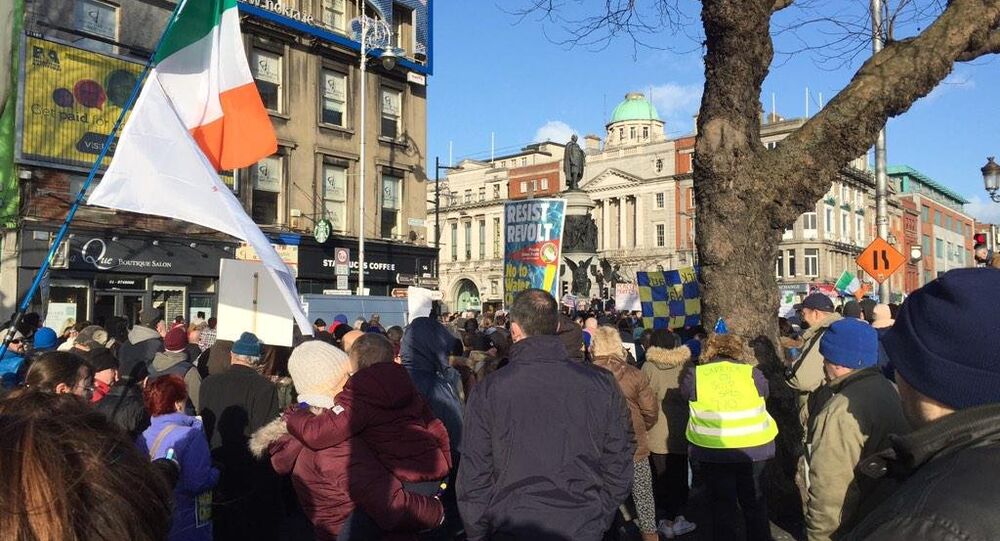 Tens of Thousands March Against Austerity Across Ireland, One Arrested

Tens of thousands are marching across Ireland in protest of the country's austerity policies that have been put in place as a result of a Troika bailout.

"Irish Water will be free! They say cut backs, we say fight back," the protesters chanted as they marched through Dublin, the Independent, an Irish daily, reported.

Over 30,000 were estimated to attend the protests in Dublin, according to the city's police, the Journal reported. One man was arrested after attempting to climb the gates of Leinster House, the country' parliament building, according to the Independent.

Streets were been locked off across Dublin as thousands of protesters gathered, the Irish Times reported. Marches also took place in Cork, Galway and other cities, according the Journal.

Protesters marched against the conditions of Ireland's Troika bailout package, which stipulated that Ireland must install water meters on households as a source of revenue.

The policy has led to increases in monthly water fees to 260 euros ($294) per family or 160 euros ($181) per individual, according to the Independent. Once meters are installed, households will be charged 4.88 euros ($5.51) for every 1000 liters (264 gallons), according to Global Water Intelligence.

The group which organized the protests, Right2Water, stated on its website that it considers access to water a human right, and believes that water charges should be abolished.

In December, a similar anti-austerity protest in Dublin attracted tens of thousands of people, according to Irish daily the Independent.