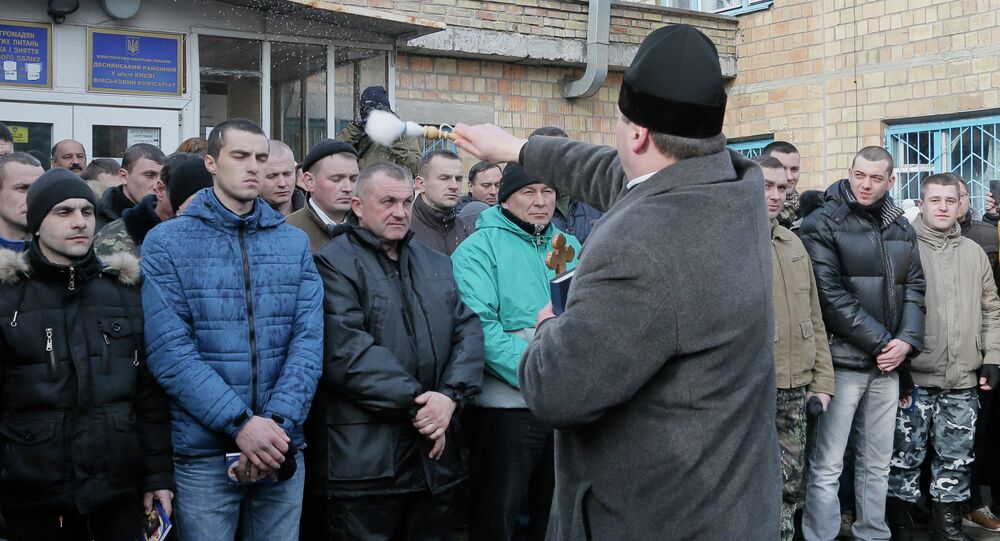 Ukrainian Recruit: I Don't Want to Fight for Those Who Don't Care About Us

As in any war, the military operation in Ukraine, which has lasted for almost a year and has taken a huge toll, continues to require tremendous financial, material and human resources. This January the Kiev authorities launched a fourth wave of mobilization, planning to recruit about 144,000 people.

ROSTOV-ON-DON, January 30 (Sputnik), Yulia Nasulina — Although Kiev says that everything is going as planned, eye-witnesses report the opposite. Many recruits are trying to escape the bloody war by going abroad. Some of them have found refuge in Russia, in the neighbouring Rostov Region. Ukrainian citizen Alexei, who is 20, told his story to RIA Novosti. He said he did not want to fight on the side of those who only care about filling out the army, but not about the people.

He lived calm life and studied…

© REUTERS / Alexander Ermochenko
Ukraine Recruits 45,000 Draftees in First Nine Days of Mobilization
"I'm from Mykolaivka in the Donetsk Region. I'm twenty and spent the past three years in a vocational school in Moscow. Last November I decided to visit my relatives and friends in Ukraine," Alexei said. He explained that he also has relatives in Russia's cities of Moscow and St. Petersburg, but he is closest with those in Ukraine's southeastern town of Mykolaivka.

Having met with his relatives in Mykolaivka he went to see his friends in Slaviansk.

"I was detained there and was asked to present my documents. They tore up my passport and told me not to vote and not to leave," he said.

…And then he received call-up paper

Alexei received a call-up paper before he could decide what to do next.

"The paper read that I must come to the local enlistment office and serve in the army, that is, go to war," he said.

He explained that he is not against military service, but does not want to fight for the Ukrainian army.

"Who wants to fight for them? They steal from our homes, take whatever they want from our stores for free and tear up our passports," he said.

Alexei told RIA Novosti that now young men are being enlisted by force.

"Some guy goes into a store in slippers, and a car drives up to the store and he is taken in. Then they send him to serve in the army. They don't care a damn about us, they just want more conscripts," he said.

"Everyone is trying to escape from them. Guys even quit their jobs and leave… I decided to do the same, and found a driver who agreed to help," he said, adding that the driver had three other young men in the same position in his shuttle.

"We were driven across forests and fields for four days through the Kharkov Region. At one point we stopped in a village. We had to lie in the back seat the whole time," he recalled.

Having crossed a checkpoint controlled by self-defense fighters, Alexei found himself in the Rostov Region.

"What to do next? I'll restore my passport through a consulate. My mom went to the vocational school and explained the situation. I was allowed to take the exams next year. And, now I will probably go to the Donetsk People's Republic," he said.