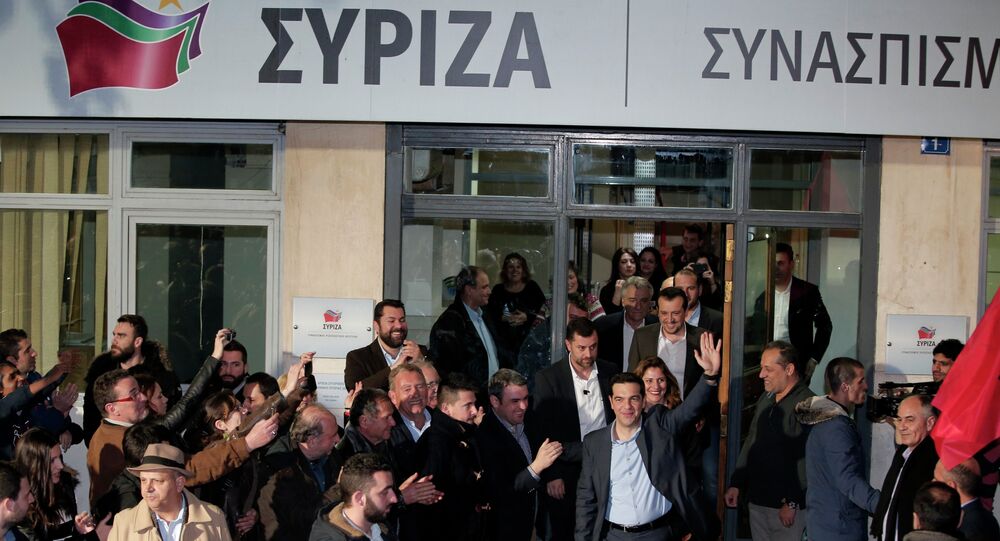 The victory of the radical left-wing party Syriza in Greece could help Russia in its struggle against EU sanctions, news magazine Foreign Policy reported.

© REUTERS / Yannis Behrakis
Syriza Leader Tsipras Sworn In as Greek Prime Minister
MOSCOW, January 28 (Sputnik) — The newly-elected eurosceptic Syriza party promised Greeks it would cancel the country's austerity programs and renegotiate terms on debt payback with its international creditors, according to  news magazine Foreign Policy.The party is laying out a more independent foreign policy as well, which could further widen the current rift in European policy toward Russia, the media outlet said.

On Wednesday, media reported that foreign ministers of the European Union planned to extend anti-Russia sanctions by another six months due to worsening situation in Ukraine, with a possibility of adding extra names to the list.

Earlier on Tuesday, EU leaders asked the Foreign Affairs Council to impose additional restrictive measures on Russia over its alleged role in the shelling of Mariupol earlier this month, in which at least 30 civilians were killed.

The newly-elected Greek government quickly spoke out against further restrictive measures on Russia.

Do you believe SYRIZA can fix Greek economy?
Voted: 1257
All polls
The Greek government, led by Prime Minister Alexis Tsipras said Tuesday that the EU statement was released without the consent of member states. "In this context, it is underlined that Greece does not consent to this statement," Tsipras said, adding that he voiced his "discontent" to EU foreign policy chief Federica Mogherini, RT reported.

The head of the Syriza, which won Greece's parliamentary elections Sunday, is not alone in his discontent with the EU statement.

"The voices opposed to new sanctions against Russia were not heard," a spokesman for the Cyprus government said, as reported by EurActiv Wednesday.

The United States, the European Union and their allies have imposed several rounds of sanctions against Russia beginning March 2014. The West cited Moscow's alleged interference in the Ukrainian conflict as the reason for the restrictions. Moscow has denied the accusations.