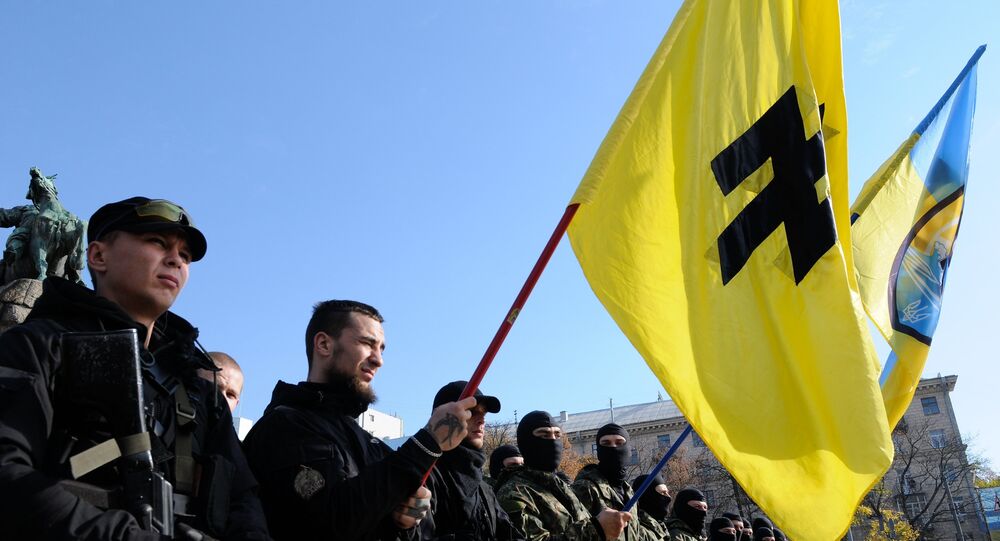 An odd video from a training session of Ukraine's Azov Battalion has been posted on YouTube that shows fighters throwing up the infamous Nazi salute.

MOSCOW, January 28 (Sputnik) — An odd video has appeared on YouTube, showing soldiers of Ukraine's Azov Battalion allegedly training, only if moshing and imitating the infamous Nazi salute can really be considered the most effective way to train.

The video, which is only about a minute long, shows half-naked men of the paramilitary branch of Ukraine's army jumping around the room, looking less like serious fighters and more like inebriated fans at a punk-rock concert. Half way through the video, several men start throwing a series of distinguishable Nazi salutes that were used as a greeting in Nazi Germany.

To a witness, unfamiliar with the gesture, the whole thing looks like a chaotic tribal dance with some elements of fake martial arts. However, the act is a form of dance, popular among some underground subcultures, including extreme right-wing and Nazi skinheads.

The video was published on the same day as the world marked the International Holocaust Remembrance Day and is a slap in the face of Ukrainian President Petro Poroshenko, who himself spoke about the importance of remembering the victims of Holocaust at the Holocaust Memorial event on Tuesday.

© REUTERS / Valentyn Ogirenko
Amendment to Bar US Funding to Neo-Nazi Groups in Ukraine is Buried
“I am calling on the entire world not to allow the replay of the tragic events. Not only should we remember the innocent victims of the past but we should also think how not to allow the replay of the tragedies similar to the Holocaust and the WWII on the whole,” Poroshenko said.

The Azov Battalion is equipped with heavy weaponry and had done much of the fighting for Kiev. It was reported that a number of foreign volunteers were fighting with the infamous battalion. Previously, the Azov Battalion was criticized for right-wing extremism and operating outside the law, the Guardian reported.

Reflections on the Liberation of Ukraine From Nazism

Ukraine’s Liberation From Nazis in WWII