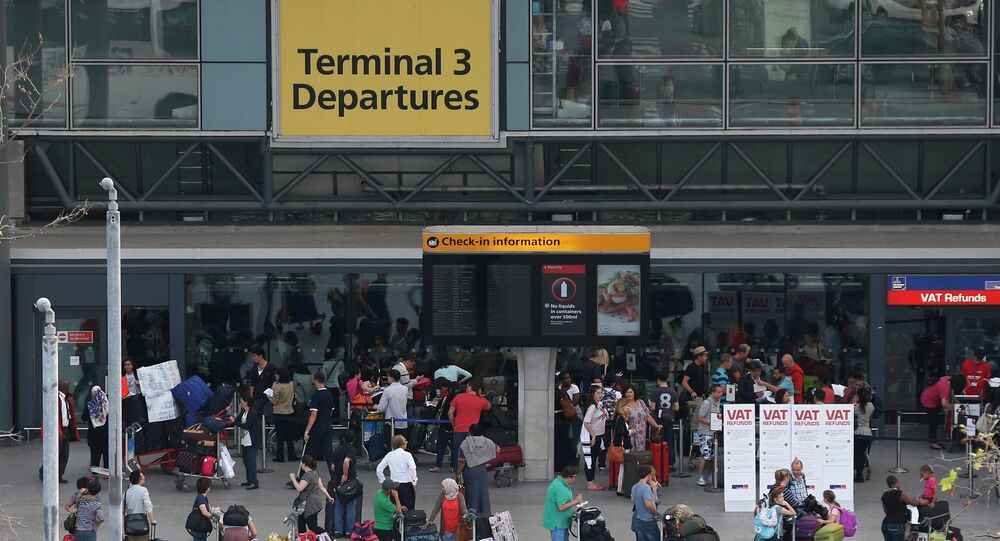 According to the plan, passengers will be requested to provide a total of 42 pieces of information, including name, passport number, credit card number and even food preferences, such as halal. The information will be stored for five years, The Guardian said.

The plan, which is to be revealed later in the day, comes in the aftermath of the January terrorist attacks in Paris, which has led to many EU countries reviewing their national security policies.

According to the plan, passengers would be requested to provide a total of 42 pieces of information, including name, passport number, credit card number and even food preferences, such as halal. The information will be stored for five years, the newspaper said.

© AFP 2020 / JUSTIN TALLIS
London to Boost Security by Installing Gunfire Detectors in Public Places
Fourteen of the 28 EU countries are currently independently creating systems that would enable the collection and processing of the personal data of airline passengers, while the Brussels' directive would involve the establishment of a supranational database, The Guardian reported.

Activists and a number of European politicians are opposed to the plan, arguing that the collection of information must have certain limits.

"It is an open breach of fundamental rights to blanketly retain all passenger data … The Paris attacks have shown that mass retention was not effective in fighting jihadis," the vice chairman of the European Parliament's civil liberties committee, Jan Philipp Albrecht, was quoted as saying by The Guardian.

© REUTERS / Stringer
Four Suspected Jihadists Arrested by Greek Police Over Belgian Terror Plot
EU regulations currently define the collection of of air passengers' personal data as "optional, not mandatory." However, in two years it might introduce a compulsory procedure, according to The Guardian.

Terrorism is again the focus of European authorities since the January terrorist attacks in Paris that claimed the lives of 17 people. On January 7, alleged Islamic extremists attacked satirical magazine Charlie Hebdo's office. The following day, a French female police officer was killed by a gunman, who also killed four hostages in a Paris kosher supermarket the following day.