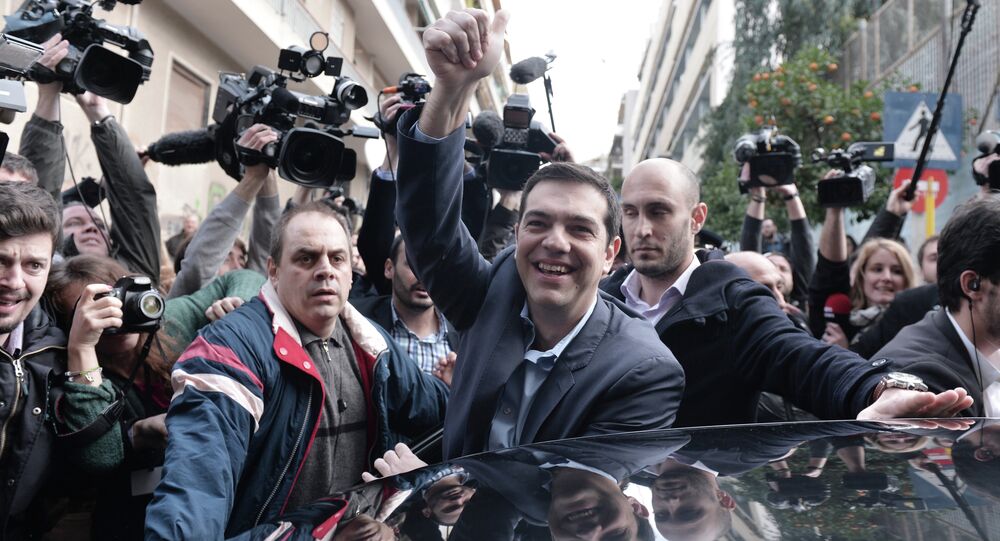 Who is Syriza and what can they do for Greece? Everything we need to know about Greece's left-wing governing party, as the eurozone crisis enters a new phase.

MOSCOW, January 26 (Sputnik) – The left-wing, anti-austerity Syriza party has decisively won the Greek election, with its leader Alexis Tsipras promising to end the austerity measures; this article will look into the nuts and bolts of Syriza party that has sent a warning sign to the rest of Europe.

© AP Photo / Lefteris Pitarakis
Strange Bedfellows: Far-Left Syriza Forms Anti-Austerity Union With Far-Right Independents
Although recent exit polls indicate that Syriza has won the election in Greece by a wide margin, it has fallen short of getting the required 151 out of 300 parliamentary seats to form a government on its own, USA Today reports. Therefore, the party has quickly formed a majority government by creating an alliance with the right-wing Independent Greeks party. Syriza is set to have 149 seats, just a couple of seats short of an absolute majority, while the Greek Independents are looking at 13 seats.

Syriza stands for "Coalition of the Radical Left" and initially started as a federation of smaller left-wing parties. Syriza defines itself as a party of the democratic and radical left with roots in popular struggles for Greek independence, democracy, labor and anti-fascist movements in Greece. The party’s logo, comprised of red, green and purple, symbolizes Syriza’s sympathy with different ideologies of left-wing culture, including values of labor movement, environmentalism, feminism, and social democracy, according to information at Syriza’s official website.

© AP Photo / Kostas Tsironis
'Independent Greeks' Party Confirms Readiness to Form Coalition With Syriza
In May 2012, Syriza became the second largest party in Greece with 17 percent of the population supporting them. Since then the party has been under attack from the then-ruling New Democracy and European elites who started a fear-mongering campaign against Syriza, by over-exaggerating the radical nature of the party to stop Syriza from becoming the first elected left-wing party in Greece’s history, Syriza’s official website says.

Syriza has become the first anti-austerity party to take power in a Eurozone country. Tsipras promised to clean up the country’s corrupt political system, reduce tax burden on the middle class, while simultaneously working to crack down on tax evasion by the business class. Syriza’s biggest promise, however, is a pledge to renegotiate the terms of Greece’s bailout, worth 240 billion euros ($270 billion), the promise that has caused anxiety in Brussels, the New York Times reports.

Whether Syriza could successfully renegotiate Greece's debt is not clear yet. However, if the party cannot successfully negotiate the country's massive debt, it may simply refuse to pay, the Independent reports.

Greece’s current financial state is far from ideal: the country has unemployment rate of 25 percent (youth unemployment over 50 percent), economy has shrunk by 20 percent over recent years, and a large percentage of the population has emigrated, according to Forbes. Money that Greece receives in bailouts do nothing, but go back to French and German banks to pay interest rates on the previous debt. Now, after winning the national election, Syriza will have a hard task at hand, trying to fix the country’s economy.

Do you believe SYRIZA can fix Greek economy?
Voted: 1257
All polls
Proposed economic reforms include the establishment of workers' cooperatives and the nationalization of banks and other private enterprises. Syriza is socially progressive and aims to provide better rights for the country's marginalized groups, including migrant and gay communities, the Independent says.

In terms of foreign policy, Syriza aims for multi-dimensional, pro-peace policy with no involvement in wars or military plans. Syriza wants to have friendly relations and cooperation with all countries, in particular, with its neighbors in Balkans and Mediterranean. Syriza is willing to have a diplomatic dialogue based on international law and try to resolve the Cyprus issue with Turkey, establishing a lasting peace in the region.

It is not clear yet what the future will look like for Greece, but the election of Syriza might very well become a turning point in the country’s history. “The Greek people are taking their future into their own hands,” said Yiannis Milios, the chief economist for Syriza, as cited by the New York Times.