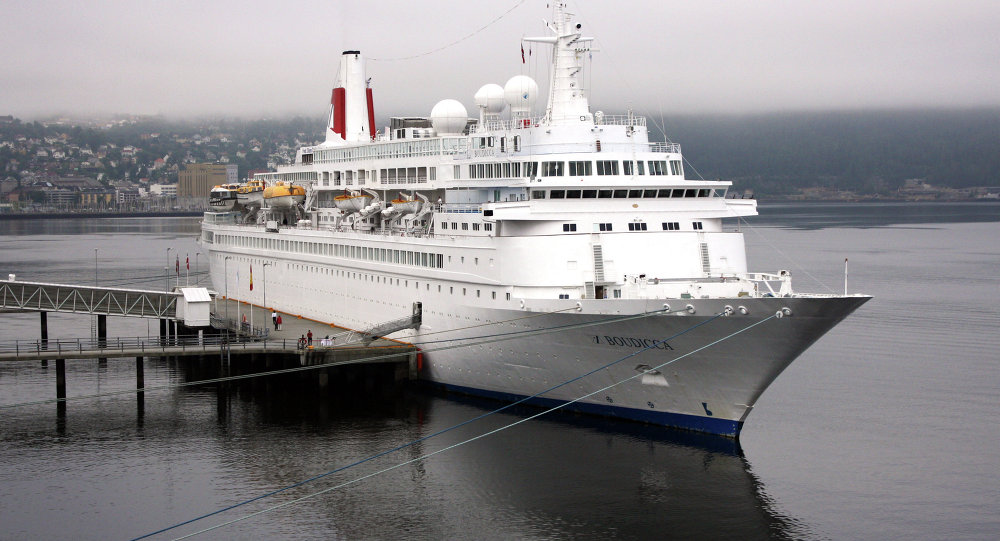 A UK-based cruise ship suffered an engine fire early Sunday morning off the coast of Casablanca.

MOSCOW, January 25 (Sputnik) — The cruise ship Boudicca is on the move after being stranded for several hours off the Moroccan coast following an engine fire; 1,140 passengers and crew are said to be aboard, the BBC reported.

The blaze, which has now been extinguished, took place at about 4 am Sunday off the coast of Casablanca, in northern Morocco. The fire is said to have left the ship "in pitch black" and "listing," according to Dave Tonkin, whose father is a holiday goer onboard the ship.

The parents of London resident Gavin Poole noted that his parents texted him, saying "no engines, fire in the engine room, there's smoke, we're in life jackets and the captain says everything is under control," the BBC noted.
All passengers and crew are believed to be safe, with no injuries reported among the 356 crew members and 784 guests believed to be aboard, according to Fred. Olsen Cruise Lines spokeswoman Rachel Jackson.

© Fotobank.ru/Getty Images / Tullio M. Puglia
EU Vows to Take Action Against People Smugglers Using ‘Ghost Ship’ Tactics
"The fire was in the engine room, but has now been extinguished, and no guests or crew have been injured," Jackson said. She noted that the ship had listed for "a short period," but stabilized, and is traveling again.
Three backup engines were running, along with the ship's two main engines, while two others are undergoing repairs.

Jackson notes that "the ship will liaise with the relevant maritime authorities, should any need emerge," adding that the company is looking to get back on schedule.

The ship departed from Southampton, Britain last Tuesday for an 18-night cruise to Cape Verde and the Canary Islands. The ship was sailing from Cadiz, Spain on Saturday, and is scheduled to arrive in Lanzarote, Canary Islands on Monday morning.

The UK-based, Norwegian-owned Fred. Olsen Cruise Lines, which has four ships in its fleet, was forced by a court to pay compensation last year to vacationers who had suffered gastric issues onboard its ships between 2009 and 2010.

Spanish Authorities Detain Ship With 1.5 Tonnes of Cocaine Worth $178Mln