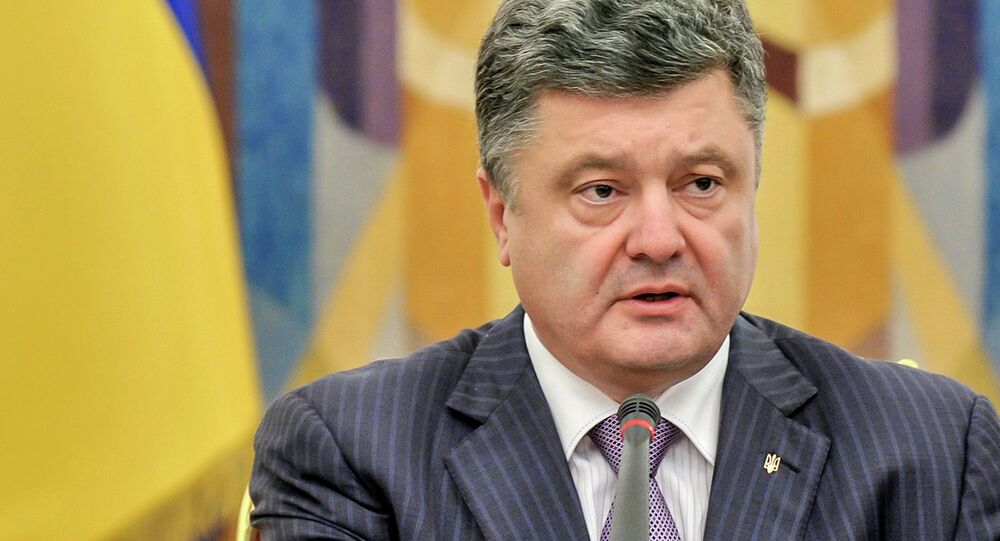 “In the past two days, the total number of destroyed terrorists reached 600 people, yesterday eight Grad rocket launchers were destroyed [by the Ukrainian army],” Poroshenko said during the National Security and Defense Council meeting in Kiev.

On Saturday, Deputy Donetsk Militia Commander Eduard Basurin said over 780 Kiev troops were killed over the past eight days, with almost 50 people surrendering.

In December 2014, Poroshenko declared the so-called silence regime in the area of military operation in southeastern Ukraine. Despite this and the ceasefire deal signed earlier, the clashes between the Ukrainian army and pro-independence forces have intensified over the past weeks, particularly in the area of the Donetsk airport.

Kiev launched a military operation against the Donbas pro-independence movement in April 2014. Since the beginning of the standoff, over 5,000 people are estimated to have been killed, according to the OSCE and UN data.

“Yesterday’s terror attack in Mariupol exceeds all previous cases in scale and scope of the tragedy. Ninety-two people were injured, 17 of them severely,” Poroshenko said during the meeting of the Ukrainian National Security and Defense Council in Kiev, adding that 30 buildings were damaged.

The Minsk agreements remain a priority for Kiev in the Ukrainian conflict resolution and currently have no alternative, Ukraine’s President Petro Poroshenko said.

“The Minsk agreements remain a priority, we do not see an alternative. We will not let the Minsk agreements be undermined, everything must be based exclusively on them. And now we must ensure [their] rigorous and full implementation, including through the trilateral Contact Group,” Poroshenko said during a meeting of Ukraine’s National Security and Defense Council.

"Ukraine remains committed to a peaceful solution to the conflict, and adheres to the Minsk agreements," the president added.

After months of bloodshed in eastern Ukraine, where Kiev-led forces have been fighting local independence supporters, the warring parties reached a ceasefire deal on September 5.

The truce deal was reached during a meeting of the trilateral Contact Group on Ukraine, comprising representatives of Kiev, Moscow, the Organization for Security and Co-operation in Europe and the self-proclaimed Donetsk and Luhansk People's republics. On September 19, the sides signed a memorandum specifying the ceasefire’s implementation.

Despite the agreements, the fighting has recently intensified in the conflict-torn Donbas region, with both sides routinely accusing each other of violating the truce.

“We have prepared a fairly broad agenda; we are coordinating our activities with foreign partners. There have been numerous talks with [US Vice President] Joe Biden, [French President Francois] Hollande, [head of the European Council Donald] Tusk, EU heads of state and [foreign policy chief Federica] Mogherini,” Poroshenko told Ukraine’s National Security and Defense Council.

Poroshenko added that the talks with foreign leaders resulted in a meeting of EU’s Foreign Affairs Council, scheduled for Monday, where “further steps to ensure the security of Ukraine and pressure Russia” will be coordinated.

Meanwhile, a source close to the EU leadership told RIA Novosti that a final decision on the meeting is yet to be made. "This possibility is being discussed, but a decision has not been made," the source said.

Tensions in southeastern Ukraine have been on the rise in January, despite a “silence regime” introduced by the Ukrainian president on December 9, 2014 and seemingly improved dialogue between the two warring parties in the last weeks of December.