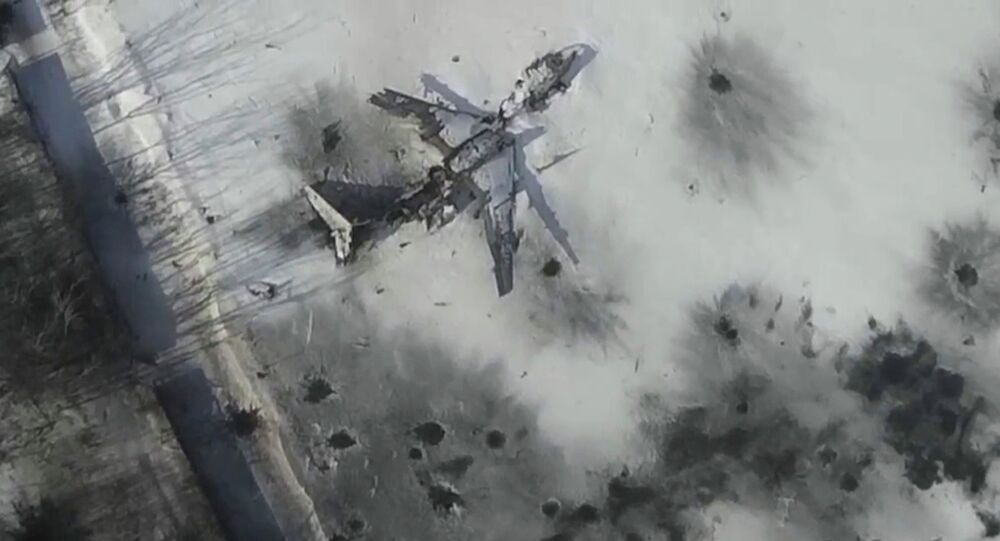 The Ukrainian military's General Staff announced that security forces are retreating from the Donetsk Airport's new terminal because its territory is completely exposed to fire, contradicting earlier statements from pro-government militias.

"Fighting continues at the airport. Our forces continue defending the airfield. Because of the constant shelling of the position of our 'cyborgs,' the territory of the new terminal is practically destroyed. Because this terminal's territory is exposed to fire, a decision was made to leave the territory of the terminal to join other line. The fighting goes on even now," he said at a briefing.

The Ukrainian security forces' press-center also announced about continuing skirmishes in the area of the airport. "As of 6 p.m. yesterday, the situation in the ATO zone remained difficult. As before, the Donetsk airport, as well checkpoints 29 and 31, remain the areas of greatest tension," the statement read. According to the operation's press-center, the security forces faced shelling overnight, all along the northern border of the self-proclaimed republics.

© REUTERS / Shamil Zhumatov
Kiev Starts Withdrawing Troops From Donetsk Airport: DPR Official
Previously, the commander of the Donbas pro-government volunteer battalion, Semyon Semyonchenko, had announced that checkpoint 31 remained under rebel control. Additionally, the Azov volunteer battalion disclosed that Ukrainian forces had left the territory of the Donetsk airport. However, the operation's press-center could not confirm this information.

On Sunday, Ukrainian security forces intensified their shelling of Donetsk, and Kiev officially admitted that a massive special operation was  being conducted at the city's airport. On Monday, Aleksandr Zakharchenko, head of the self-proclaimed Donetsk People's Republic, accused Kiev of violating the ceasefire and attacking Donetsk. According to Russia's Deputy Minister of Foreign Affairs, Grigory Karasin, the recent events in Ukraine confirm the gravest concerns about Kiev's intentions to resolve the situation in the region by force

© Sputnik / Gennady Dubovoy
US-Made Weapons, High-Power Explosives Found in Donetsk Airport
In mid-April, Kiev launched a military operation in the country's southeast, predominantly Russian-speaking region, after its residents refused to recognize the February coup's results. According to the UN, over 4,800 civilians were killed in the ensuing conflict

A ceasefire agreement was reached during talks in Minsk on September 5, 2014 and a "silence regime" was proclaimed in the region on December 9 under OSCE mediation. Since January 9, the intensity of artillery shelling in the region has rebounded.