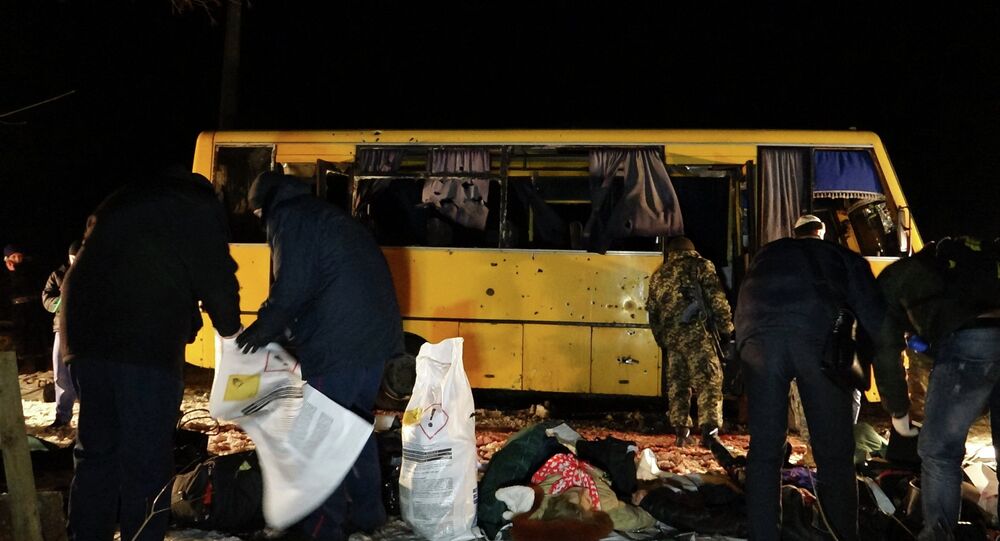 Moscow has proposed to start immediate withdrawal of heavy weaponry from southeastern Ukraine (Donbas) and to use its influence on the local militia to persuade them to accept this option.

© AFP 2021 / ALEXANDER GAYUK
OSCE Data on Bus Attack in Eastern Ukraine Contradicts Kiev Claim of Militia’s Involvement
MOSCOW, January 18 (Sputnik) — Moscow has proposed an immediate heavy artillery withdrawal from southeastern Ukraine (Donbas) and has expressed its readiness to work with the Organization for Security and Co-operation in Europe (OSCE) and to influence local independence supporters to make such a move.

"Despite the conflicts around one of its [contact line's] parts, the Russian side has proposed to start immediate withdrawal of heavy weaponry from the contact line in accordance with its position outlined by the coordinates, on which the Ukrainian side insists," a statement published on the official website of the Russian Foreign Ministry Sunday says.

The Russian side "will be able to use its influence on the local militia to persuade them to accept this option as a good will gesture in order to avoid new deaths among civilians", the statement adds.

© REUTERS / Nikolai Ryabchenko
Moscow Alarmed by Kiev Blaming Local Militia for Volnovakha Bus Tragedy
On Sunday, Kremlin spokesperson Dmitry Peskov said that Russian President Vladimir Putin's plan for the withdrawal of heavy weaponry from eastern Ukraine sent in a written message to Ukrainian President Petro Poroshenko on January 15 was rejected by Kiev without an alternative having been offered.

Putin proposed in his message to Poroshenko that both sides to the Ukrainian conflict "take urgent measures toward discontinuing mutual attacks, as well as to immediately withdraw [heavy weaponry]" from the southeast.

Putin also said in the message, outlined by the Russian Channel One, that Moscow is "ready to work with the OSCE to monitor the implementation of these [ceasefire observance] steps".

The withdrawal of heavy weaponry from the line of contact between independence fighters and Kiev forces that launched a military operation in Donbas last spring, is stipulated by a memorandum signed at a meeting of the Contact Group on Ukraine in Minsk in September. The meeting was attended by Russian and OSCE representatives.