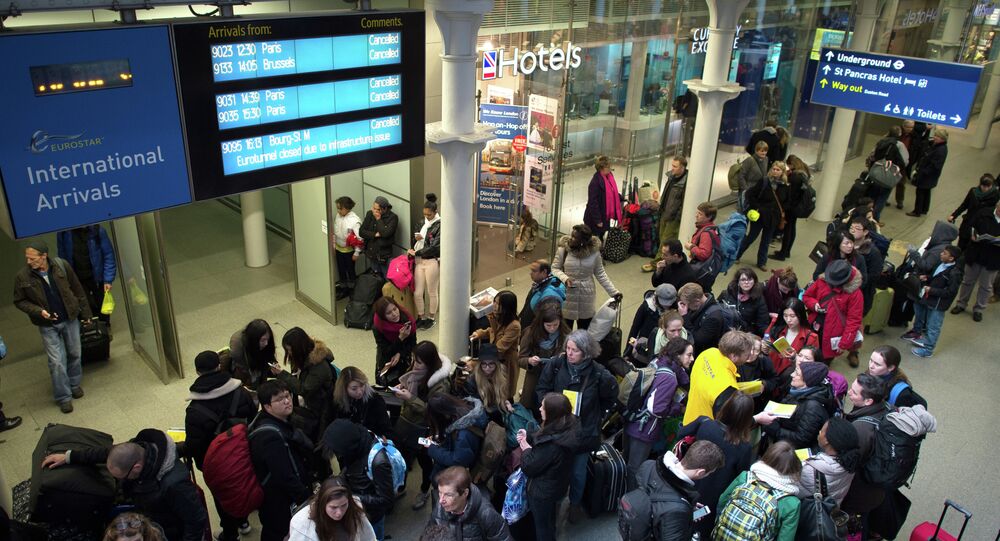 Over 10 Eurostar Trains Canceled Due to Power Supply Problems

© AFP 2021 / PHILIPPE HUGUEN
Eurostar Out of Action After Lorry Fire in Channel Tunnel
LONDON, January 18 (Sputnik) — A day after suspending trains running between the United Kingdom and France due to a lorry fire, Eurostar was once again forced to cancel 11 trains on Sunday over a power outage.

"Eurotunnel experienced new power supply problems this morning which meant that both tunnels were again closed for two hours," a message on Eurostar's website read.

© AFP 2021 / Stefan Wermuth
English Channel Tunnel Train Services Resume After Lorry Fire
A travel update posted on Eurotunnel's website stated that the disruption in passenger service was due to "an incident in the Tunnel," causing delays of up to five hours.

A crowd of some hundreds of people at the train station in London was offered to take the ferry across the channel or wait for services to resume.

"This closure was a separate incident, unrelated to the problems experienced yesterday," Eurostar's service update continued.

On Saturday, all high-speed Eurostar train services through the Channel Tunnel were halted due to smoke caused by a fire on a lorry in the north tunnel. Last November, over 1,000 Eurostar passengers were left stranded inside two high-speed trains due to a power outage on the rail link.

Eurostar Out of Action After Lorry Fire in Channel Tunnel