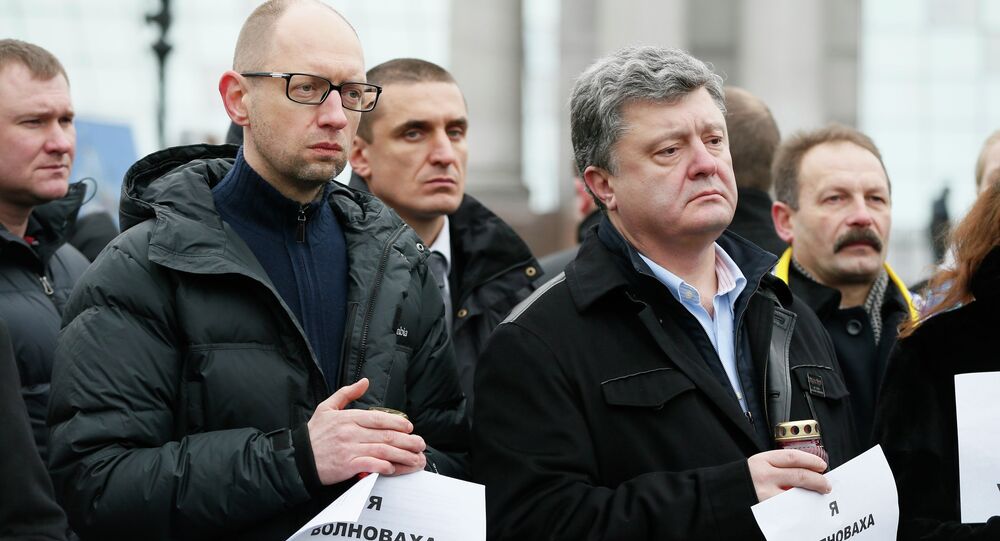 Speaking at the march commemorating victims of Tuesday's bus attack in eastern Ukraine's Volnovakha village, Poroshenko promised not to "yield another inch" of Ukrainian soil.

"We will take back Donbas. We will restore Ukrainian heritage and we will demonstrate that our unity is another crucial factor in our victory," Poroshenko addressed a crowd of people gathered at Kiev's Independence Square (Maidan Nezalezhnosti).

Speaking at the march commemorating victims of Tuesday's bus attack in eastern Ukraine's Volnovakha village, Poroshenko promised not to "yield another inch" of Ukrainian soil.

© AFP 2020 / GENYA SAVILOV
Unity March in Memory of Bus Massacre Victims to Be Held in Ukraine Sunday
"We will be victorious, there will be peace in Ukraine… We will protect and revive our state," Poroshenko was quoted as saying.

The Volnovakha bus attack took the lives of 12 people and injured 18 others.

Kiev had previously claimed that the bus had been hit by rockets fired from the east, the direction of a town where local independence forces had been allegedly present at the time. Authorities of the self-proclaimed Donetsk People's Republic (DPR) stressed they had not been involved in the attack.

© Sputnik / Igor Maslov
Donetsk Leader Says Kiev Preparing for War
On Saturday, the Organization for Security and Co-operation in Europe (OSCE) Special Monitoring Mission (SMM) released an investigation report concluding that the rockets which hit the bus were fired from the northeastern direction.

Despite the ceasefire agreement reached by the warring sides in September 2014, reports of ongoing violations continue to emerge in eastern Ukraine.