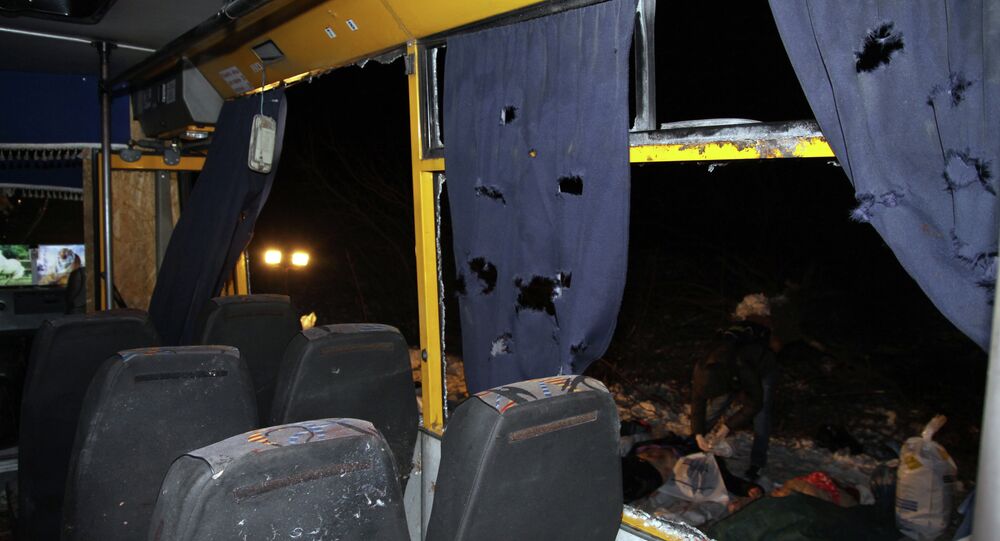 The Special Monitoring Mission of the Organization for Security and Co-operation in Europe has confirmed that Kiev and the DPR have agreed on the launch of a joint-inquiry into a recent attack on a bus.

MOSCOW, January 17 (Sputnik) – The Special Monitoring Mission (SMM) of the Organization for Security and Co-operation in Europe (OSCE) has confirmed that Kiev and the self-proclaimed People's Republic of Donetsk (DPR) have agreed on the launch of a joint-inquiry into a recent attack on a bus that killed 12 people in eastern Ukraine.

"The JCCC [Joint Centre for Control and Co-ordination] and 'DPR' leadership agreed to an SMM proposal to begin their special joint inquiry into the incident causing the deaths of civilians on a bus in Volnovakha (35km [about 22 miles] south-west of Donetsk, government-controlled) starting on 16 January," the SMM said in a statement released Friday.

© REUTERS / Heinz-Peter Bader
Ban Ki-moon Condemns Shelling of Passenger Bus in Donetsk
According to the statement, OSCE observers monitored the meeting at the JCCC headquarters in Donetsk, where the agreement was reached. Russian representatives were also present at the meeting.

Pushilin added that the commission would include representatives from Ukraine, Russia and the DPR, as well as OSCE monitors.

On Tuesday, 12 people were killed and 18 others were injured when a bus was attacked close to a Ukrainian military checkpoint near the town of Volnovakha in the eastern Donetsk region.

Later in the day, the UN Security Council condemned the attack and called for an impartial investigation into the case.