Member of Bulgaria's parliament said that Bulgaria is witnessing an "Atlantic 'invasion'" with a number of Western leaders visiting Sofia to secure its support in the geopolitical struggle with Russia.

MOSCOW, January 15 (Sputnik) — Bulgaria is witnessing an "Atlantic 'invasion'" with a number of Western leaders visiting Sofia to secure its support in the geopolitical struggle with Russia, a member of Bulgaria's parliament told Sputnik Thursday. 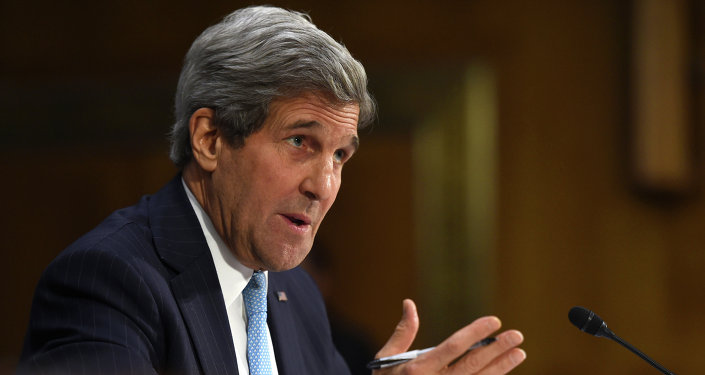 © AP Photo / Molly Riley
US Vows to Help Prop Up Bulgarian Security, Diversify Energy Supplies
"This is just the beginning of the Atlantic 'invasion' in the region… Both UK Foreign Secretary Philip Hammond and US Secretary of State John Kerry made statements that imply that there is a diplomatic preparation for war with Russia. And the White House wants to make sure that Bulgaria will always defend the pro-American stance and will voluntarily take the front-line position," Magdalena Tasheva, member of Bulgaria's parliament, told Sputnik.

Tasheva also noted that there are four military bases in Bulgaria that are, on paper, jointly operated by the US and Bulgaria but in practice could be considered as solely American.

"There are fears that they [the bases] will be used not only directly for military conflicts, but also for various provocations, and Bulgaria will become the second Ukraine," Tasheva added.

During his visit to Sofia, John Kerry promised to partner with Bulgaria to help it address new security concerns and diversify energy supplies, as part of a broader strategic plan to be launched this year.

The countries had "agreed to work to enhance regional security – including through joint exercises, implementation of NATO's Readiness Action Plan, actions to bolster stability and security," Kerry said at a news conference with Bulgaria's Foreign Minister Daniel Mitov.

Relations between Russia and the West have deteriorated amid the Ukrainian crisis. Western countries accuse Moscow of meddling in Ukraine's internal affairs and sending troops there. However, Russia has repeatedly stated it is not involved in what it holds to be an internal Ukrainian conflict.

Questions Raised Over Video of Ukrainian Military Vehicles in Bulgaria

Kerry to Travel to Bulgaria to Discuss Energy, Trade: US State Department