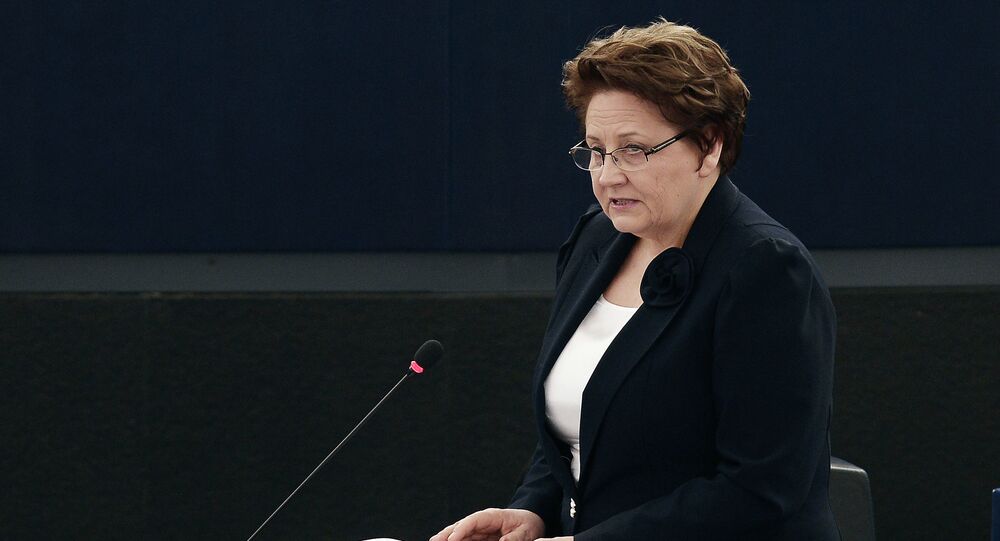 The European Union has to give practical and political support to Ukraine as well as other Eastern partnership countries, however, it also has to continue a diplomatic dialogue with Russia, Latvian Prime Minister Laimdota Straujuma said at the plenary session of the European Parliament.

© AP Photo / Christian Lutz
EU Foreign Ministers Unlikely to Lift Anti-Russia Sanctions Monday: EU Diplomatic Source
"We believe that we have to work in several directions — first of all, we have to give practical and political support to Ukraine and other Eastern partnership countries," Straujuma said at the plenary session of the European Parliament. "Secondly, we have to work with Russia. We have to continue a diplomatic dialogue."

Straujuma stated that Latvia, which holds the presidency of the EU Council, would engage in a political process to achieve a peaceful solution in the Ukrainian crisis.

"During our presidency we will try to engage in a political process, look for a sustainable, a peaceful solution to the conflict in Ukraine by respecting its territorial integrity and independence," Straujuma said.

© Sputnik / Sergey Kuznecov
EU to Consider Sanctions Relief With Actual Progress on Ukraine: Latvian FM
Relations between Russia and the West deteriorated amid the crisis in Ukraine. Russia has repeatedly denied its involvement in the conflict and has called on other countries to influence Kiev to stick to the Minsk agreements to resolve the conflict in the country's east.

On September 5 2014, Kiev authorities and eastern Ukrainian militia signed a ceasefire agreement in Minsk. At a meeting of the Contact Group on Ukraine on September 19, Ukrainian authorities and representatives of the self-proclaimed people's republics of Donetsk and Luhansk signed a memorandum on the implementation of the ceasefire.

Russia Loses 0.2 Percent of GDP in 2014 Amid Sanctions: Study