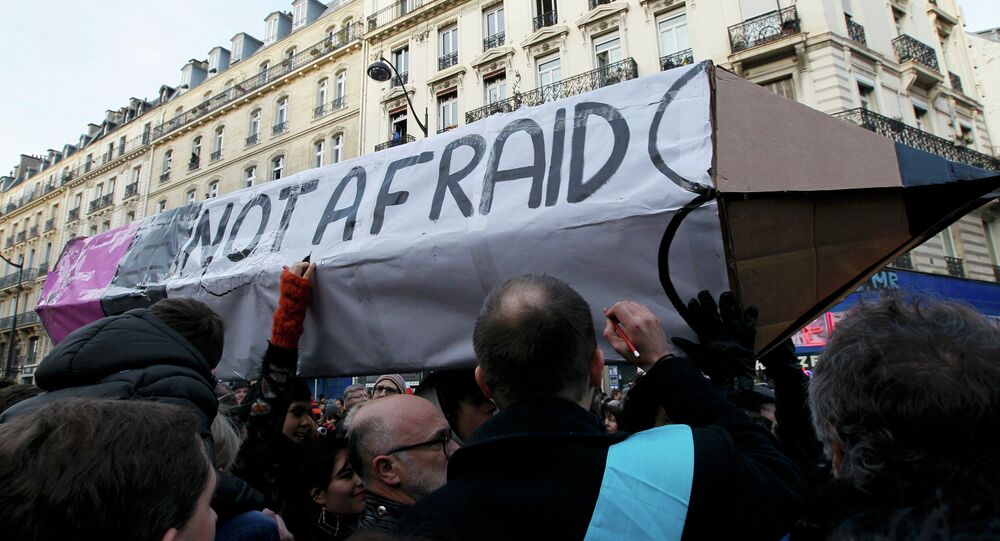 Muslims should be protected from hateful publications just as Jews are legally protected from anti-Semitism, according to a special advisor to the president of the Union of Islamic Organizations of France.

Paris Muslims on Security Measures in Mosques and Islamic Terrorists
MOSCOW, January 14 (Sputnik) — Last week's deadly attack on the French satirical weekly magazine Charlie Hebdo over its publication of cartoons of the Prophet Muhammad raises questions on the freedom to insult the religious sentiments of believers, special advisor to the president of the Union of Islamic Organizations of France (UOIF) Lhaj Thami Breeze told Sputnik in an interview on Wednesday.

"As far as our organization is concerned, we do not believe it correct to insult the Prophet Moses, Jesus Christ or any other [religious figure]. In Europe, laws exist prohibiting anti-Semitism, and if someone were to offend a Jewish person, he would be penalized in court. By analogy with this law, another should be adopted –to prohibit the defamation of religion," Breeze said.

The official stated his view that the attack on the office of Charlie Hedbo was predictable, since the staff was regularly called upon to stop publishing material which Muslims found provocative.

"This is the view shared not only by Muslims," Breeze said. "Here in France, many intellectuals had warned the magazine against such actions [the publication of inflammatory cartoons]. French philosopher Edgar Morin wrote an article for Le Monde in 2009, in which he had called on Charlie Hebdo to stop the publication of offensive cartoons and [other] materials. He had added that the freedom of speech has its limits," Breeze noted.

When asked about the work that is being done by Islamic associations in France to prevent future terrorist attacks, Breeze noted that efforts are aimed first and foremost at the integration of believers into French society.

© Fotobank.ru/Getty Images / Carl Court
Part of Muslim Community's Distancing From British Culture Worrying: UKIP
"We are working actively along two tracks. First, we try to explain and to make clear that Islam is in fact a religion of love and tolerance. You can often find children in Muslim families who bear the names of Jesus and Mary –in honor of Christ and his mother. This is important to understand. Second, our work aims to integrate Muslims into society and to teach them how to interact within it, and to instill respect in the laws of the country in which we live. We do not have precise statistics, but can assume that the number of Muslims living in France today ranges between 7 and 10 million people."
© AFP 2020 / FRANCOIS LO PRESTI
France Arrests 54 for Defending Terrorism
On January 7, Charlie Hebdo's Paris office was attacked by gunmen, who murdered 12 people and injured another 11. Two of the terrorists responsible for the attack were later shot by police after an extensive manhunt, and a third suspect turned himself in.

Hours prior to the attack, the magazine had posted a caricature of the leader of the Islamic State militant group on its Twitter page. The satirical magazine has been known for decades for its unrestrained literary and artistic criticism of every conceivable topic, including religion. Its editors had received several death threats in years past for its publication of cartoons featuring the Prophet Muhammad; its offices were firebombed in 2011.