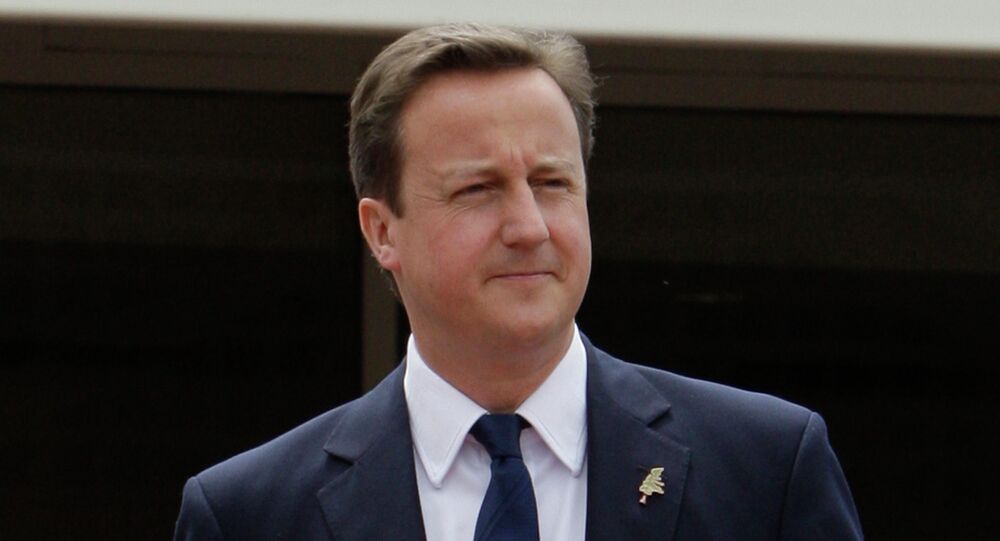 British Prime Minister David Cameron has threatened to boycott a series of pre-election debates unless the leader of the country's Green Party is allowed to participate, which political opponents say is an "unacceptable", cowardly political move.

MOSCOW, January 14 (Sputnik) — British Prime Minister David Cameron has come under a concerted attack from his political rivals, who have accused him of attempting to avoid participating in a series of televised pre-election debates on a false pretense, the BBC reports.

Cameron had said earlier this month that he would boycott the debates, scheduled to run in April ahead of the May 7 election, unless Natalie Bennett, the leader of the country's left-leaning Green Party, is also allowed to participate. Cameron explained his position by saying that "you can't have some minor parties in and not other parties in."

The leaders of the Labour Party, the Liberal Democrats and the UK Independence Party (UKIP) signed a letter addressed to the prime minister calling on him to reassess his position, warning of the consequences should he refuse.

In the letter, the politicians state that "it would be unacceptable if the political self-interest of one party leader were to deny the public the opportunity to see their leaders debate in public." The letter adds that "these debates are not the property of the politicians and I do not believe the public will accept lightly the prospect of any politician seeking to block them."

The letter also warns that if Cameron refuses "to reconsider, the three party leaders who have committed to participate will ask the broadcasters to press ahead with the debates and provide for an empty podium should you have a last-minute change of heart."

© REUTERS / BBC/Jeff Overs/Handout via Reuters
British PM Wants to Ban WhatsApp, iMessage Under New Surveillance Plans
Earlier, political commentators noted that Cameron's ostensible support for the inclusion of the left-leaning Green Party in the debates may be a sign of the Conservative leader's outright lack of desire to participate in the debates, or a play to include the Greens in order to reduce the concentration of attacks aimed at the governing Conservative-Liberal Democrat coalition's record.

The debates would give Labour leader Ed Miliband the chance to improve his poor ratings, garnered by the mostly conservative British press, while giving UKIP's Nigel Farage a chance to target Conservative voters dissatisfied by their chosen party's performance.

© REUTERS / Luke Macgregor
UK Labour Party Leader Accuses Cameron of ‘Running Scared’ From TV Debates
Over the weekend, Miliband told the BBC that he felt it was "pretty disreputable that David Cameron went in to the 2010 election saying these debates were the most important thing that we could possibly have, people shouldn’t make feeble excuses to get out of them, and [now] he is doing precisely that." The Labour leader added his view that Cameron was "running scared from these debates."

UKIP's Farage told the BBC that Cameron had been "seen to be the loser" in debates ahead of the 2010 election, which may have weighed on his decision not to participate in the debates scheduled for April. The Liberal Democrats' Lord Ashdown, leading the party's election campaign, told Sky News that "you can't just let the prime minister or anybody else basically hold the country and our democracy to ransom by saying no."

© REUTERS / Facundo Arrizabalaga
Cameron: UK to Reform the EU and Remain a Member
The Conservatives' Daniel Finkelstein defended the prime minister, writing in The Times that there is no point in Cameron participating in a debate where UKIP would have an opportunity to attack "the insider on behalf of the viewers without being held to account."

The Green Party presently has one MP in the country's parliament, along with a few local councillors, and was earlier deemed not to have qualified for major party status by Britain's broadcast regulator Ofcom, Reuters has explained. In Ofcom's opinion, the party failed to gain "sufficient support in previous elections and current opinion polls to be added to Ofcom's major party list for the purposes of the May 2015 elections." In addition to the Greens, the country's parliament has seven other one to two seat parties.