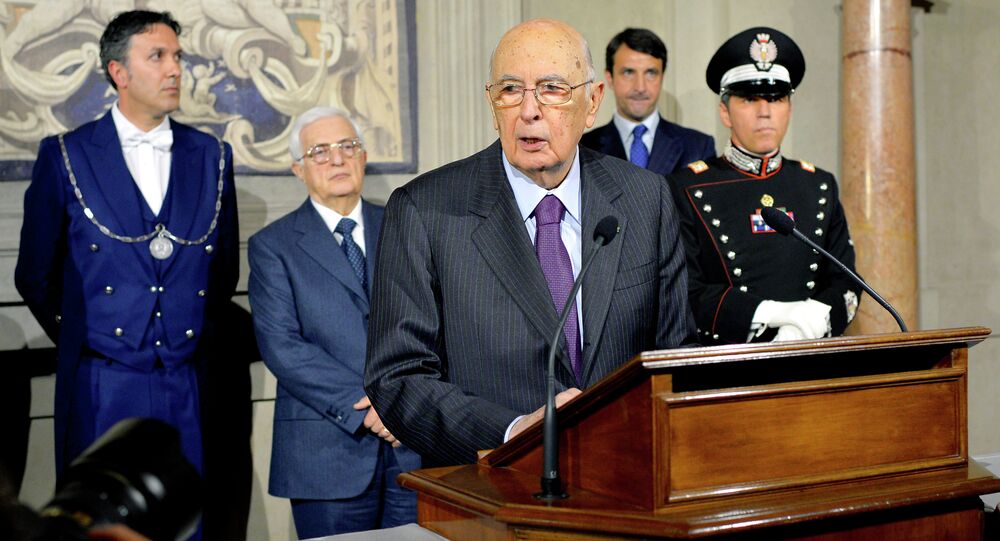 Earlier it was reported that president Napolitano would sign resignation letter on Wednesday.

"[Napolitano] will stand down within the next few hours with a long list of achievements to his credit," Renzi stated, speaking in the European Parliament in Strasbourg, France, as he handed over Italy's presidency of the Council of the European Union to Latvia.

Earlier in the day, local media reported that Napolitano was expected to sign a resignation letter about 11:00 a.m. local time (10:00 GMT) Wednesday.

© REUTERS / Tony Gentile
Italian President Napolitano to Step Down Soon
In his New Year's speech on December 31, 2014, Napolitano, 89, announced his intent to resign in the short term, citing his advanced age. Though he did not indicate an exact date, news outlets reported Napolitano's resignation might take place after the end of Italy's six-month EU presidency.

Napolitano was first elected president in 2006. He agreed in 2013 to serve a second term to resolve deadlocked parliamentary elections that year. However, Napolitano immediately made it clear that he did not exclude the possibility of an early departure from his post as head of state.

According to the Italian Constitution, the president is elected during a joint session of the Italian Parliament's two houses. The presidential term in Italy is seven years.