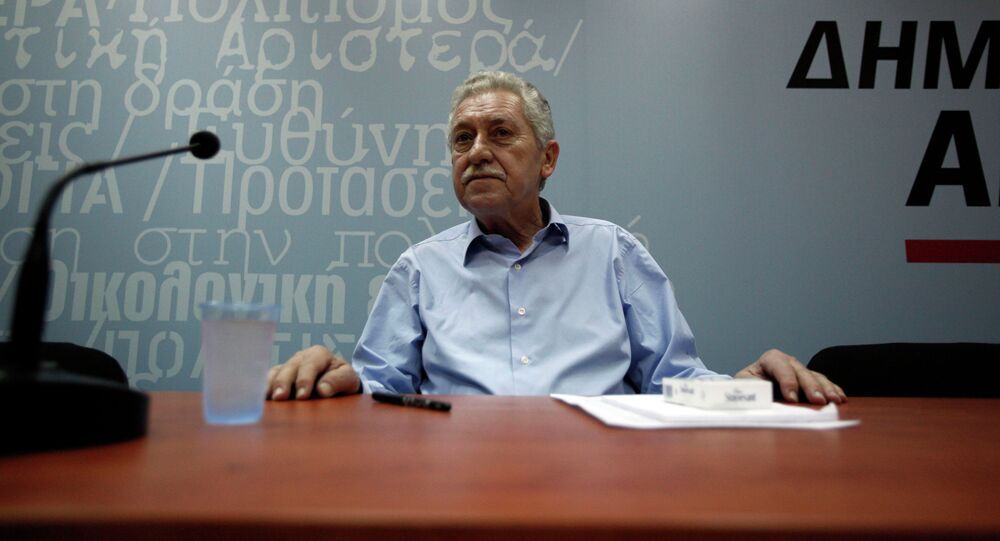 According to Fotis Kouvelis, first of all, Greece needs a coalition government with cooperation of every major political party and domestic tax reform.

MOSCOW, January 13 (Sputnik) — Greece's Democratic Left party (DIMAR) will continue pressing for major policy change through the upcoming snap parliamentary elections, but suggests that Greece should stay in the eurozone and the European Union, the party's leader told RIA Novosti on Tuesday.

© Sputnik / Vladimir Rodionov
European Banks Prepare for Stress Test Over Grexit: Reports
"Greece should stay in the eurozone, and it can do so… Greece will not leave the eurozone," Fotis Kouvelis said, adding that "Greece needs to carry out specific democratic reforms."

The party leader stated that the country needs domestic tax reform, as he deems the current sytem "unfair." Restructuring Greece's outstanding debt of more than 320 billion euros ($378 billion) is also necessary for the country to remain in the eurozone.

According to Kouvelis, Greece needs a coalition government with cooperation of every major political party, including DIMAR.

"The country must quickly solve the problems concerning political changes and tackle issues linked to the outstanding social and economic problems," the DIMAR leader said.

Greece will hold snap parliamentary elections on January 25. The country's parliament failed to elect a president in the third and final round of voting on December 29, 2014, and was subsequently dissolved. Polls show that eurosceptic party Syriza will likely win the forthcoming vote, and that may result in much-speculated exit by the country from the eurozone.

Eurogroup to Continue Cooperation With Greece After Elections