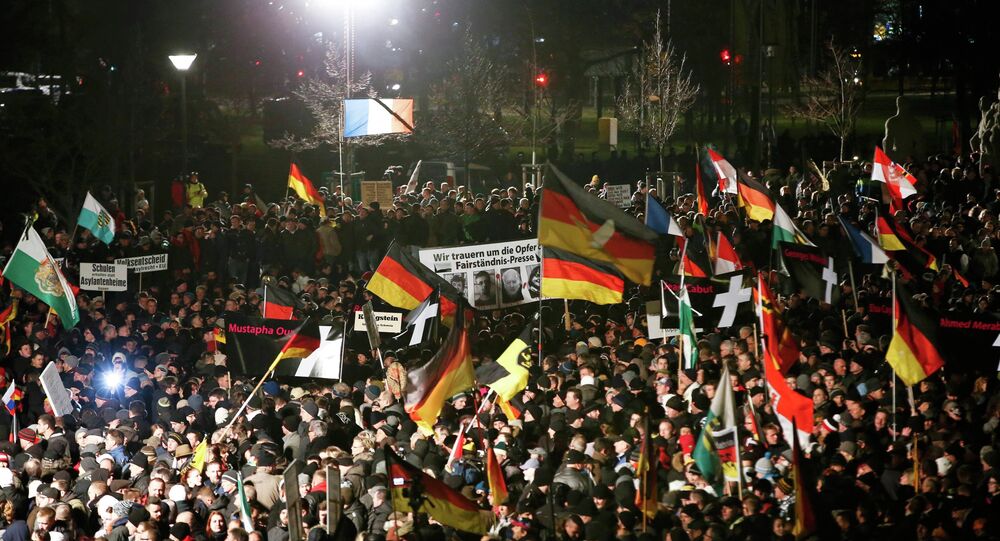 Some 25,000 took part in an anti-Islam rally in the German city of Dresden, with counter protests held in several cities across the country attracting tens of thousands.

The anti-Islam rally on Monday was held to commemorate victims of the brutal attacks in France, including the assault on Charlie Hebdo, a satirical magazine, according to organizers. Participants held a minute of silence for those, who lost their lives last week. Some carried posters saying "They can’t kill our freedom" and "Je suis Charlie", a rallying cry of support for the victims of French attacks.

Others were holding posters saying "Fight Islamisation, stop the flood of foreigners now" and "Stop multiculturalism. My homeland will stay German,", according to AFP.

The anti-Islam movement in Dresden is spearheaded by the Patriotic Europeans against the Islamification of the West (PEGIDA). The group held the first such event in October 2014, with several hundred people attending. Since then rallies have attracted thousands of people.

© AP Photo / dpa, Arno Burgi
Germany: Tens of Thousands Rally Against Xenophobia, Racism in Dresden
However, demonstrations against PEGIDA marches are gaining momentum. AFP reported that some 100,000 people took part in counter protests across Germany on Monday. Also, 8,000 participated in an anti-PEGIDA rally in the organization’s hometown of Dresden, while 30,000 people came to a similar event in Leipzig, German news agency DPA reported.

Munich saw a crowd of 20,000 people, who wanted to send a strong message against the anti-immigration sentiment currently on the rise in Germany.

Approximately 35,000 participated in a similar event held in Dresden on Saturday, according to Deutsche Welle.

© AP Photo / Markus Schreiber
Merkel, Top German Officials to Take Part in March for Tolerance in Berlin
German officials decried the movement, urging PEGIDA to cancel the Monday event. "If the organisers had a shred of decency they would simply cancel these demonstrations," German Justice Minister Heiko Maas told Bild, as quoted by AFP. "It is simply disgusting how the people behind these protests are trying to exploit the despicable crimes in Paris."

On Monday, German Chancellor Angela Merkel said that " Islam is part of Germany," as quoted by the Telegraph. "I am the Chancellor of all Germans. And that includes everyone who lives here permanently, whatever their background or origin," she added.

Merkel, along with members of her cabinet, is expected to attend a rally for an "open and tolerant" Germany, which will be held in Berlin on Tuesday.