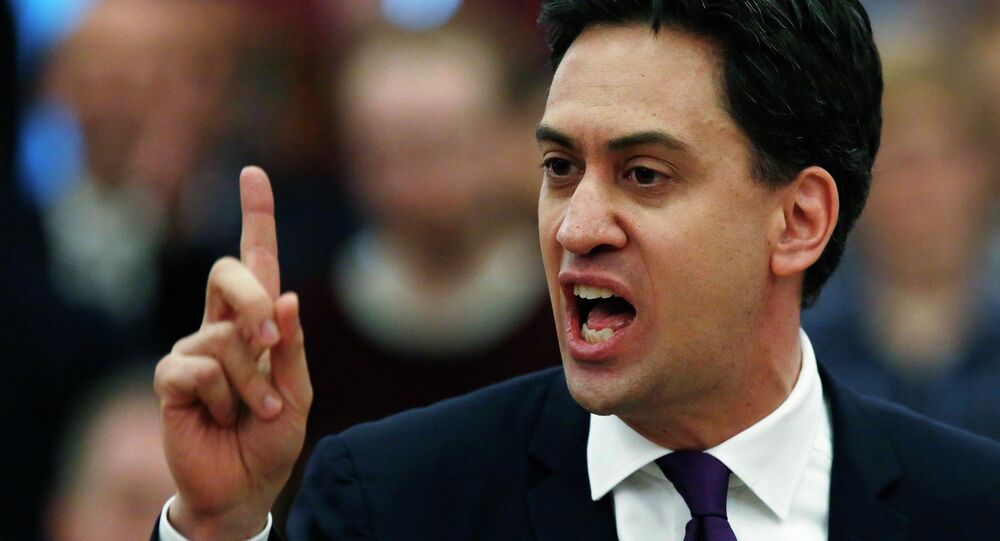 The Labor leader has fallen into trouble for words he said in a pre-interview with BBC, leading many to call on his remarks as using the system for his own advantage.

MOSCOW, January 12 (Sputnik) — Leader of the UK opposition, Edward Miliband, has been sharply criticized for his alleged attempt to misuse the National Health Service (NHS) in political game and “weaponize” it as an election issue, according to the Telegraph.

Mr. Miliband reportedly made a comment about his intention to make the NHS a centerpiece of his political strategy to a number of BBC executives during a background briefing in November 2014. He is said to have used the word “weaponize” to outline his strategy towards the NHS, which caused a widespread indignation among a number of UK media and politicians, though Mr. Miliband has not yet admitted using the verb.

© Sputnik / Sergei Guneev
Cameron Plans to Introduce Communications Data Bill to Prevent Terror Attacks
“We are in the fight for the future of the National Health Service […] This is about how we are going to change this country. So that we have an NHS that properly works for people,” Mr. Miliband said in a statement during the Andrew Marr Show on BBC.

Medical performance in emergency situations has indeed decreased in its quality to the worst levels over the decade. Waiting times for patients to get necessary medical assistance can sometimes vary from 4 to 12 hours. According to the Telegraph, almost 21,000 patients experienced poor healthcare system management in the two weeks over Christmas, with the fire engines, the Red Cross and police vehicles called upon for help.

Mr. Miliband blamed David Cameron for "betraying" people's confidence in the NHS and incited voters against Prime Minister’s policy. Mr. Cameron reciprocated, saying that Labour was politicizing the NHS and using it for his own benefit. He also called Miliband’s statement about ‘weaponizing’ the NHS the "most disgusting phrase” he ever heard during his political career.

© Photo : Wikipedia
UK Labour Party Orders Members to Avoid Raising Immigration Issue: Reports
"The NHS is not a weapon, it is a way we care for our families, it's a way we care for the elderly, it's a way we look after the frail. So perhaps when he gets to his feet he will deny that he said he wants to weaponize the NHS, a disgusting thing to say," UK Prime Minister said in a statement, cited by the Telegraph.

Mr. Miliband earlier said that the UK health sector requires the long-term investment, which “only Labour is prepared to make”, as reported by the Guardian. He also stressed that growing pressure on medical institutions and the current crisis demand immediate action and promised to hire extra medical stuff if he wins the forthcoming election.

The general election to the UK Parliament is to take place on May, 7. It is expected to be a very hard competition, with every single vote playing a key role for the future course of the country, according to Mirror Online.