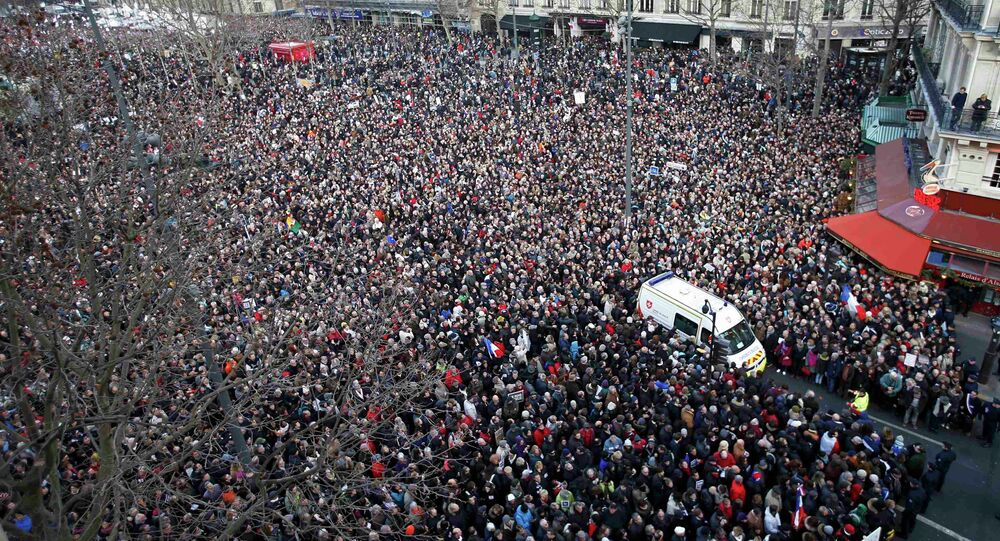 More than 3 million people have attended the Paris unity march in France in honor of the victims of the recent terror attacks. Sunday’s gathering is one of the largest mass actions in the recent history of France.

Other media sources, however, suggested that the number exceeds 3.3 million.

Hundreds of thousands of people, including around 40 world leaders, have taken part in the Republican March in central Paris, while many others took to the streets of other French cities.

Looking at the streets of #ParisUnityMarch there is hope that the answer to hate is more Peace. #CharlieHebdo pic.twitter.com/Rzxc1coL4T

The politicians were met with applause and cheers from residents of the buildings along the march route. The top leaders were followed by the heads of France’s various religious groups, as well as some local politicians. After a minute of silence in memory of the terrorist attacks' victims, Hollande thanked each of the leaders attending the march and met with the victims’ families.

In the last event of such scale, back in 1998, over 1.5 million gathered in central Paris to celebrate the French national football team’s World Cup victory.

In the past week, France has suffered three terror attacks, including one on the Charlie Hebdo satirical newspaper's office on Wednesday, the killing of a female police officer on Thursday, and the hostage-taking in a Paris kosher store on Friday. A total of 17 people have died in the attacks.