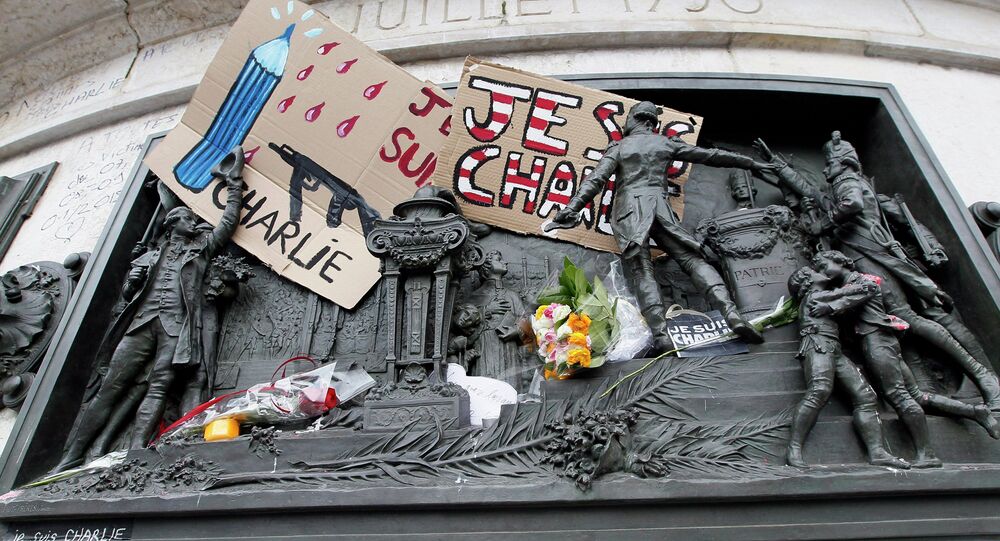 A survey by French pollster Odoxa found that over 80 percent of the country's population were ready to "mobilize" to show solidarity for 17 victims who died in an assault on the office of Charlie Hebdo magazine and a kosher supermarket in Paris.

© REUTERS / Jason Redmond
Hundreds Rally in NYC in Solidarity With Victims of French Attacks: Reports
MOSCOW, January 11 (Sputnik) — More than a million of demonstrators are expected to march in Paris on Sunday in solidarity with those who perished in a deadly terror attack on a French satirical magazine.

A survey by French pollster Odoxa found that over 80 percent of the country's population were ready to "mobilize" to show solidarity for 17 victims who died in an assault on the office of Charlie Hebdo magazine and a kosher supermarket in the Paris area over the span of three days, Le Parisien daily said.

The rally is planned to begin at 3 p.m. local time (14:00 GMT). Demonstrators will march in two columns, with the main one following a route from Place de la Republic, passing by the Boulevard Voltaire and the Bastille, before terminating at the Place de la Nation.

© REUTERS / Denis Balibouse
Hundreds of Afghans Rally Hailing Charlie Hebdo Attackers: Reports
An increased security presence is anticipated, with a total of 5,500 police and military troops, preserving the peace for the time of the rally, according to French Interior Minister Bernard Cazeneuve. Given the record number of participants, there can be disruptions to traffic circulation. Cazeneuve also said France would remain on high alert for week ahead.

The solidarity march will bring together dozens of world leaders and political high-fliers from around the globe. A delegation of Russian officials, headed by Foreign Minister Sergei Lavrov, will attend the rally, as well as leaders from across Europe – Germany, Britain, Spain, Sweden, Norway, Latvia, Ukraine and the Turkish, Georgian and Israeli prime ministers, and the Palestinian president.

I'm on my way to Paris to march with the French people. The #CharlieHebdo murders will not crush our spirit or our values.

Before the massive rally, France's President Francois Hollande is set to meet with his predecessors in this capacity and French prime ministers, and also with foreign leaders and representatives of the Jewish community.

© Sputnik / Evgeny Biatov
Lavrov to Head Russian Delegation of 'Unity Rally' in Paris January 11: Foreign Ministry
The demonstration comes after days of spontaneous rallies across France and also the world in support of freedom of expressions. Marches were held in Paris, Nice, Nantes, Bordeaux, Lyon, Marseilles and Toulouse, drawing around 700,000 people, with thousands gathering elsewhere across the globe holding up pens – the symbol of journalism – and banners that read "Je Suis Charlie" (I am Chalie), a reference to Chalrie Hebdo magazine.

"Je Suis Charlie" has been a rallying cry for protesters after eight Charlie Hebdo cartoonists were murdered Wednesday by Islamist terrorists Cherif and Said Kouachi, who also killed police officers outside the magazine's office. Another attacker, Amedy Coulibaly, who is believed to have had links to the brothers, killed four hostages in a supermarket in eastern Paris on Friday. He is also reported to be behind the murder of a policewoman that took place in southern Paris on Thursday.