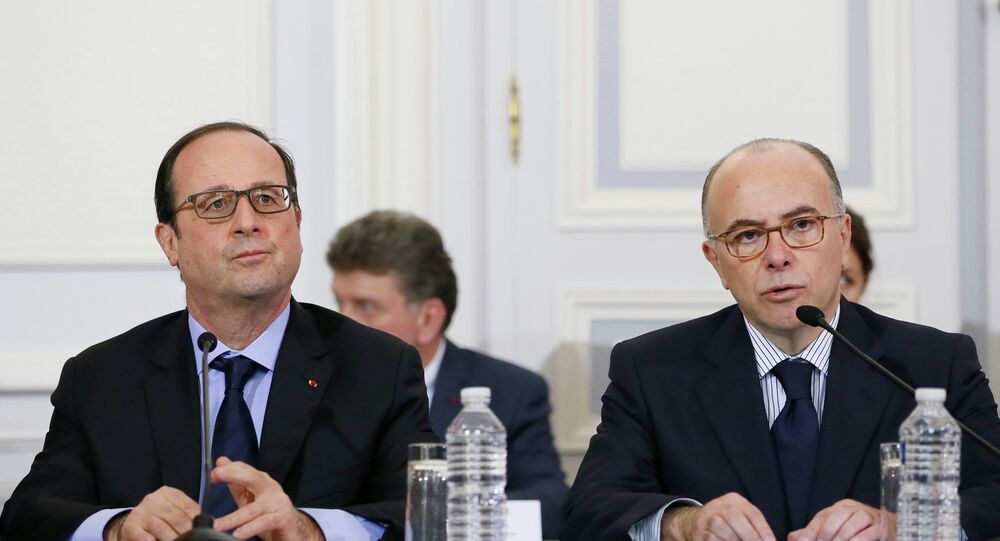 The maximum level of vigilance will be maintained further, as risks have not been eliminated yet, French Interior Minister Bernard Cazeneuve says after a meeting in the president's residence.

"We will maintain the high level of vigilance. We are exposed to risks," Cazeneuve said after a government meeting in the French President's residence, as quoted by Le Figaro newspaper. He added that the high level of terror alert will be maintained for several weeks.

After the office of Charlie Hebdo satirical magazine in Paris was attacked by alleged Islamic extremists on Wednesday, French Prime Minister Manuel Valls ordered to raise the terror alert in the Paris region of Ile-de-France to the maximum level.

© REUTERS / Philippe Wojazer
Special Services Failed to Prevent Paris Attack Despite Being Informed: Alfa Veteran
Cazeneuve also stressed that the authorities will provide the highest level of security during the march in memory of the victims of this week's terrorist attacks, due to be held in the French capital on Sunday. Around 1 million people, including the leaders of France, Germany, the United Kingdom, and a number of other nations, are expected to take part in the demonstration.

On Wednesday morning, two gunmen burst into the editorial office of Charlie Hebdo magazine, known for issuing cartoons, ridiculing Islam. The attackers, later identified as brothers Said and Cherif Kouachi, killed 12 people and injured 11, and escaped from the scene. Following two days of nationwide manhunt, the suspects were killed on Friday by French police some 20 miles northeast of Paris.

© REUTERS / Handout via Reuters TV
Charlie Hebdo Attack Likely Planned by Al-Qaeda 'Sleeper Cell': Reports
On Thursday, a lone shooter killed a female police officer in Paris' southern suburb of Montrouge. The police reportedly said there was a connection between the two attacks.

On Friday, the Montrouge shooter, identified as Amedy Coulibaly, took several people hostage in a kosher food shop in eastern Paris. He shot dead four hostages before being killed in a police assault.