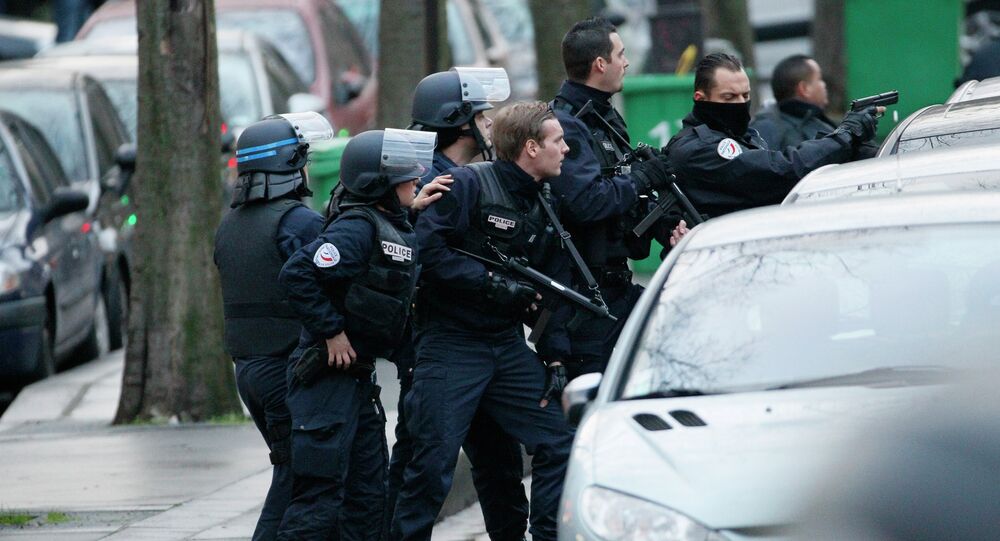 "Two intense stand-offs with gunmen are underway in and around Paris on Friday [January 9] – one involving the two brothers wanted in the Charlie Hebdo massacre and the other a hostage situation at a kosher grocery store," CNN reported.

The double hostage crisis in Paris has been characterized as "one of the most difficult situations you could possibly imagine," by Roy Ramm, Scotland Yard's chief of hostage negotiations, as cited by the Guardian.

Thousands of French security officers have been on high alert after the hideous massacre at satirical magazine Charlie Hebdo on Wednesday, which claimed the lives of 12 people. The reports say that the attackers, Cherif and Said Kouachi, broke into the building shouting Islamist slogans.

The BBC said the brothers claimed they were "al-Qaeda, Yemen," adding that this could be an apparent reference to the al-Qaeda in the Arab Peninsula group (AQAP). According to a US senior official, 34-year-old Said Kouachi travelled to Yemen in 2011 and spent several months training the combat skills that he later demonstrated at the Charlie Hebdo office, the New York Times said. The other had been charged with terrorism-related activities in 2008. Additionally, both brothers were on the US no-fly list.

After the suspects fled from the crime scene, a large-scale manhunt involving military SWAT teams and helicopters was launched by French security forces.

AFP map of the region northeast of Paris where Wednesday's massacre suspects are cornered with hostage pic.twitter.com/H9SwsdTFRf

At around 8.30am GMT on Friday January 9, media sources reported shots being fired and hostages taken by the Kouachi brothers in Dammartin-en-Goele, a small town near Charles de Gaulle airport.

While the perpetrators were cornered by police inside a print works and negotiations were underway, another brazen hostage-taking occurred in eastern Paris at a kosher Jewish market near the Porte de Vincennes. At least five people were seized by an assailant and two killed during the shooting, reports said.

It later transpired that the gunman in the second siege was the same individual suspected of killing policewoman Clarissa Jean-Philippe in Montrouge – Amedy Coulibaly, the Guardian reported. The Associated Press revealed that the man appeared to be linked to the Charlie Hebdo suspects, citing an unnamed police official. Amedy Coulibaly's accomplice was identified as Hayet Boumddiene.

#PHOTO These police images show Hayat Boumeddiene (L) and Amedy Coulibaly (R), suspects in the death of a policewoman pic.twitter.com/qZXyEXlqnv

Citing Le Monde, the Guardian said that Coulibaly, 33, along with Cherif Kouachi were "the most committed followers of convicted terrorist Djamel Beghal," while Hayat Boumeddiene, 26, was known as Coulibaly's partner since 2010.

A Le Parisien employee said Friday that the newspaper had apparently interviewed Coulibaly in 2009, when he revealed he was planning to meet then president Nicolas Sarkozy in order to discuss an Elysees campaign aimed at supporting French youths.

While the French security forces were containing the double terror threat, evacuating people from around the siege sites, fear was spreading rapidly among peaceful civilians.

"There is a lot of fear. We're scared. The schools are being evacuated," said Louis Zenon, a 14-year-old, who lives in Dammartin-en-Goele, as quoted by the Associated Press.

At 16:30 GMT during a coordinated attack, French security forces stormed the two sites simultaneously, eliminating the terrorists in an attempt to release all the hostages, the Guardian said, adding that the identities of the terror suspects were confirmed. Unfortunately, a number of civilians were seriously injured and some killed during the operations, according to Agence France Presse.

In the light of recent events, European authorities have raised questions over the growing threat posed by returning Western jihadists, involved in fighting together with al-Qaeda affiliates and the Islamic State. According to some estimates, about 1,200 French civilians have joined Islamist groups operating in the conflict zone in Syria and Iraq. France has one of the largest Muslim populations in the West.