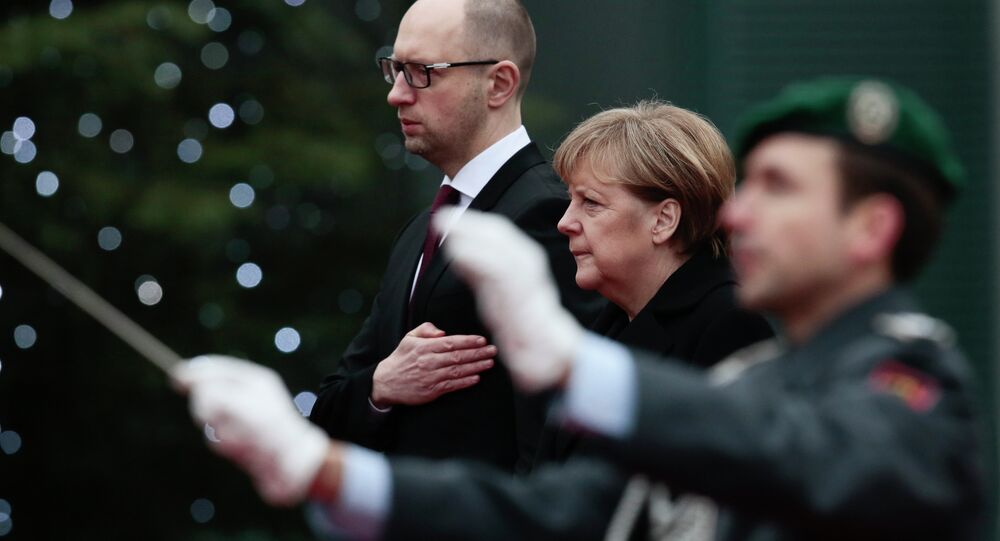 Ukrainian Prime Minister Arseniy Yatsenyuk has amazed the world with his knowledge of history: in his interview with the German TV channel ARD, the politician said that "all of us still clearly remember the Soviet invasion into Ukraine and Germany," referring to the Second World War.

On Thursday, while on an official visit to Berlin, the bespectacled young politician was interviewed live by the German TV channel ARD, where he claimed that the USSR had kicked off the Second World War by invading Germany.

"All of us still clearly remember the Soviet invasion of Ukraine and Germany," he said. "We need to avoid it."

"Nobody has the right to rewrite the results of the Second World War," he added. "Russia's President Putin is trying to do exactly this."

Yatsenyuk, however, did not clarify what particular results of the Second World War President Putin is trying to rewrite. The TV host seemed uninterested in pursuing the matter.

“We have sent a note to the German Foreign Ministry requesting its official position regarding extremist remarks made by Ukrainian Prime Minister Arseniy Yatsenyuk, which distort history,” Titov told the press.

Prior to the Second World War, most of Ukraine, including Kiev, was part of the USSR although what was to become western Ukraine was split between Poland, Czechoslovakia, and Romania.

In September of 1939, Nazi Germany and the Soviet Union split Poland and entered into other countries which had been established in the wake of the First World War.

Although several independent Ukrainian states had existed briefly following the collapse of the Russian Empire, these were short-lived and had been subsumed into Poland and the Soviet Union by 1921.

And of course, it was Nazi Germany which invaded the Soviet Union on June 22, 1941 under the codename Operation Barbarossa. Soviet troops eventually did take Berlin in May of 1945, after a grueling conflict which had cost the USSR over 22 million lives.

The TV host seemed not to be aware of the Prime Minister's historical gaffe.

The video of the interview is available on Youtube in German, Ukrainian and Russian.

The prime minister’s remarks have already been criticized by Russia.

In his Twitter, the head of Russia’s parliamentary committee on international affairs Aleksei Pushkov made the following comment:

"Yatsenyuk has finally gone off his rocker. After his statement regarding 'the Soviet invasion into Germany and Ukraine' during the Second World War, one can’t take him seriously."

Yatsenyuk: Russia Likely to Stop Being One of Ukraine’s Main Trade Partners

Leaders of Germany, France, Russia and Ukraine to Meet January 15