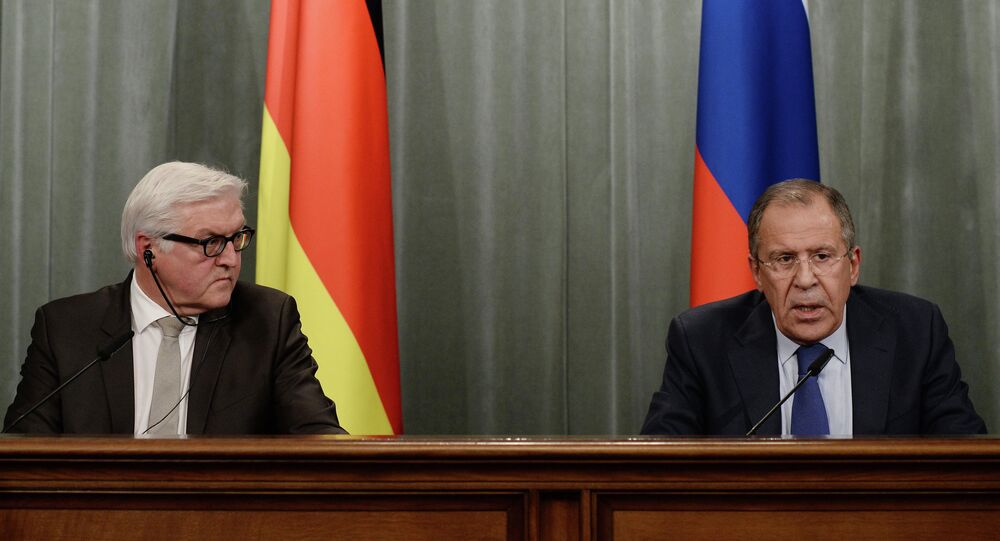 © Sputnik / Aleksey Nikolskyi
Progress Could Be Achieved in Ukraine Crisis Settlement in 2015: Steinmeier
MOSCOW, January 8 (Sputnik) — Russian Foreign Minister Sergei Lavrov and his German counterpart Frank-Walter Steinmeier in a telephone conversation stressed the need to strengthen the positive trend in the peaceful settlement of the Ukrainian internal crisis, the Russian Foreign Ministry said in a statement Thursday.

"The need to reinforce a positive trend of the peaceful settlement of the Ukrainian internal crisis by ensuring a ceasefire, continuing the process of prisoner exchanges, solving the humanitarian issues in the region and the soonest possible start of genuinely constitutional reform involving all regions and political forces in Ukraine was emphasized," the statement read.

According to the statement, Lavrov and Steinmeier also stressed the importance of strict compliance by everyone involved in the conflict with the Minsk agreements.

© Sputnik / Maksim Blinov
Steinmeier Calls for Contact Group Meeting on Ukraine to Convene Early
The foreign ministers agreed to continue the discussions on the Ukrainian crisis in bilateral and four-party Normandy formats, comprising representatives of Russia, Germany, France and Ukraine.

During the phone conversation, the two sides exchanged views on the results of the foreign ministers' meeting in the 'Normandy format' which took place in Berlin on January 5. The meeting was dedicated to discussing the Minsk agreements and plans for the upcoming talks.

The Minsk talks, which included representatives of the self-proclaimed Donetsk and Luhansk people's republics (DPR and LPR), were held on September 5 and 19. The warring sides reached a breakthrough ceasefire agreement, but have subsequently accused each other of violating it.

Progress Could Be Achieved in Ukraine Crisis Settlement in 2015: Steinmeier