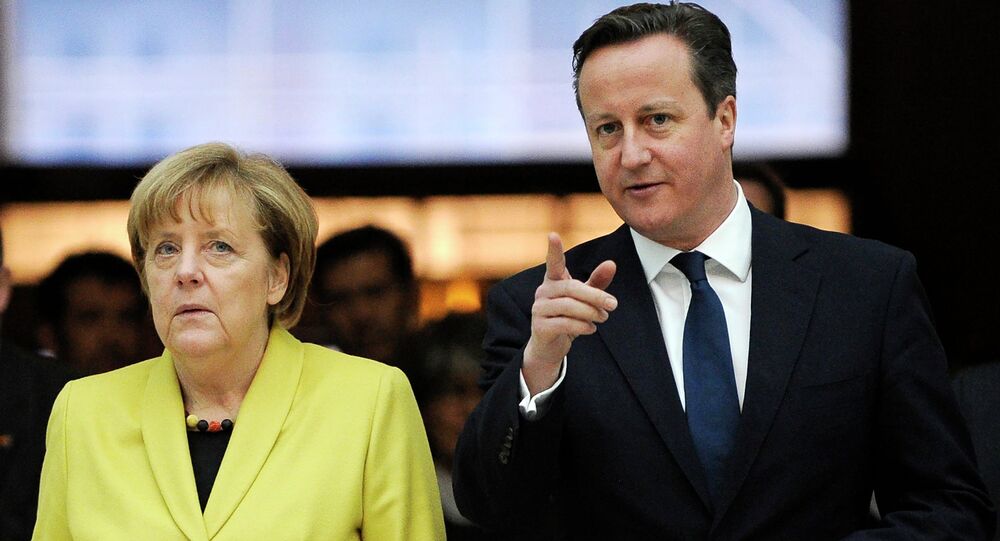 Chancellor Merkel meets with Prime Minister Cameron in London during the course of her tour of European capitals in preparation for June’s G7 summit in Bavaria.

© Sputnik / Sergei Guneev
Cameron Wants EU Membership Referendum to Take Place as Soon as Possible
MOSCOW, January 8 (Sputnik) – UK Prime Minister David Cameron has said in a joint press conference with German Chancellor Angela Merkel that he is confident that he will get the reforms he is looking for from the European Union, which would result in Britain staying in the EU.

The reform aims of the UK PM, which are focused on the desire to curb migration from other EU countries, would require a major revision of the EU’s governing treaties in order to be achieved. However, at Wednesday’s meeting with the media, Merkel appeared to pour cold water on any suggestion of Britain’s desired treaty renegotiations, explaining that reforms at the national level were enough.

"As regards freedom of movement, as David quite rightly said, we have no doubt about the principle of freedom of movement being in any way questioned," she said, according to the Guardian. "But we also have to look at abuse of [those] principles. We are looking at legislation here. We want to see how this plays out at the local level."

© Sputnik / Sergei Guneev
UK Parliamentarian Says Cameron Unwilling to Hold In/Out Vote
At Wednesday’s conference Cameron was focused on the reform of welfare and the impact of immigration, rather than the more radical measures which he has expressed support for in the past: in a speech in November, Cameron declared, "EU migrants should have a job offer before they come here," warning that "UK taxpayers will not support them if they don't."

However, the Guardian reported on Monday that such a proposal is regarded as unacceptable by the EU Commission, as it would involve redefining the principle of "free movement of persons, services and capital," which lie at the very foundation of the EU, as laid down in the 1957 Treaty of Rome.

Cameron on Wednesday instead went on to list some of the reforms he believes are necessary to tackle what he termed "the abuse of free movement." He stated that migrants to the UK should not be eligible for benefits until they have been paying into the system for four years, they must find a job within six months or go back home, and that child benefit payments from the British welfare system should not be paid to migrants whose children are residing in a different country.

The UK PM hopes to gain concession from partners in the EU before taking the matter to referendum in 2017, provided he and his party win the UK general election in May this year. However, UKIP leader Nigel Farage told the Telegraph on Wednesday that he doubted Cameron could gain the concessions he is looking for: "The one thing the Chancellor will not budge on is the principle of free movement in the European Union, he’s made that clear," he said, continuing that he believed that unless the PM could gain control over "who does and does not come into our country," the British people would vote to leave the Union in any referendum.

About Half of Britons Ready to Secede from European Union: Poll