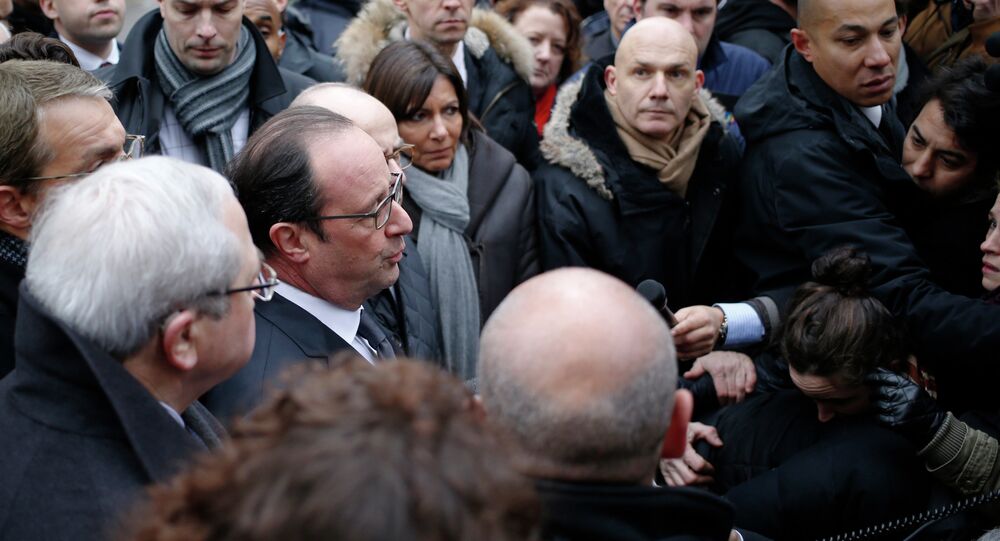 The International Federation of Journalists (IFJ) will urge the French authorities to "do whatever they can to find out who did this and bring them to justice," according to the head of the IFJ's Human Rights and Safety Office Ernest Sagaga.

"It is an attack on press freedom, an attack on democratic rule and it is a challenge to the safety of everyone – not only journalists, but anyone who has views that could be different from someone else's," the head of the IFJ's Human Rights and Safety Office Ernest Sagaga said.

"We cannot even begin to excuse what happened today on any grounds whatsoever – neither religion, nor politics, nor anything else," he added.

"This is sheer mindless violence to attack a magazine," Sagaga said, adding that as the investigation is underway, violence and political discourse should not be mixed up.

© REUTERS / Remy de la Mauviniere/Pool
Hollande: Shooting in Charlie Hebdo Office in Paris ‘Terrorist Attack’
According to Sagaga, the International Federation of Journalists will urge the French authorities to "do whatever they can to find out who did this and bring them to justice," as well as to speed up the inquiry.

On Wednesday, three gunmen armed with Kalashnikov assault rifles entered the Charlie Hebdo offices in central Paris, shooting and killing 12 people and injuring a number of others, while shouting "Allah Akbar", according to local media reports. The killers fled the scene and a manhunt is underway.

Hollande added that French authorities will track the perpetrators down regardless of how long it takes in order to bring those responsible to justice.

The Charlie Hebdo satirical magazine had previously received threats from Islamists as it had published caricatures of the prophet Muhammad. In 2011, the magazine's former office was fire-bombed following the publication of controversial cartoons depicting the prophet Muhammad.