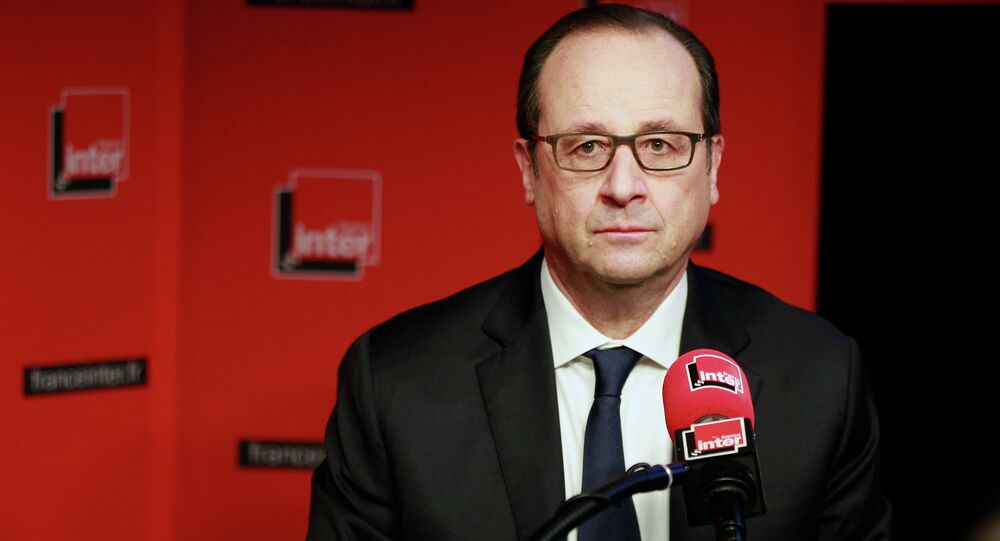 President Francois Hollande announced that his country will not unilaterally intervene in Libya and urged the international community to increase their involvement in the crisis resolution.

MOSCOW, January 5 (Sputnik) — On Monday, French President Francois Hollande ruled out France’s unilateral intervention in Libya, calling for the international community to make every effort to resolve the crisis situation in the country.

"We are acting to contain terrorism in the south, but France will not intervene in Libya because it's for the international community to live up to its responsibilities," Hollande told French radio.

© Sputnik / Alexei Nikolsky
Hollande Calls on Greece to Adhere to Its EU Commitments
Since Muammar Gaddafi was removed from power by rebel forces, Libya has experienced major political turmoil, with militias and rival governments trying to destroy each other and seize power. The country became an epicenter of illegal arms trading, spreading weapons from its territory to other conflict areas worldwide.

"Cases, both proven and under investigation, of illicit transfers from Libya in violation of the embargo cover more than 12 countries and include heavy and light weapons, including man-portable air defense systems, small arms and related ammunition and explosives and mines," as reported by Reuters.

Members of the Arab League are expected to arrange negotiations on the Libyan crisis on Monday evening.

The Arab League has a long history of resolving and mediating conflicts in the Middle East, including peacekeeping mission during Iraq’s invasion to Kuwait in 1961 and more recent mediation efforts in Lebanon in 2006-2008.