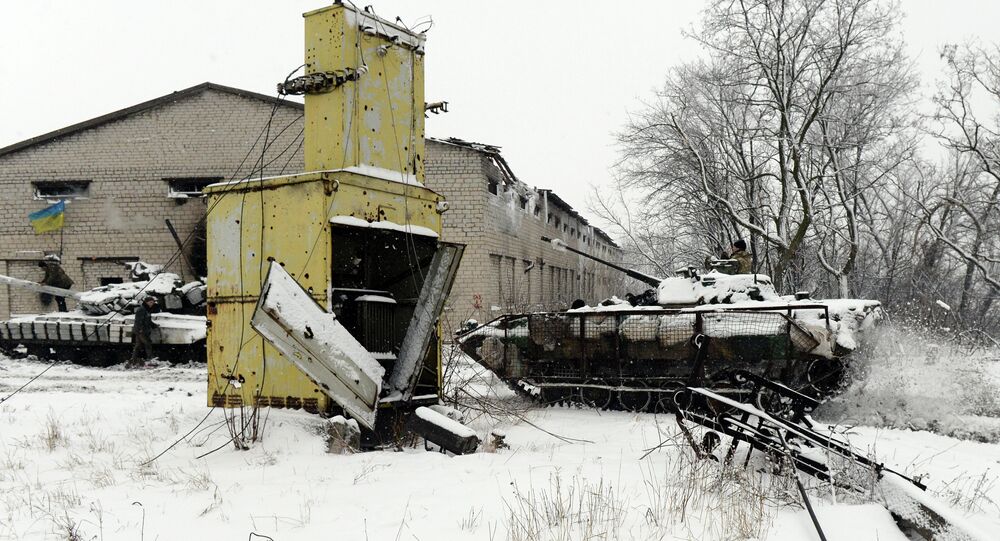 Despite the formal ceasefire and 'silence regime', shells continue to strike Donetsk, the city administration reports.

© AP Photo / Markiv Mykhailo / Pool
Ceasefire Violations in E Ukraine Declining Since New Year’s Eve: Donetsk
DONETSK, January 4 (Sputnik) — The Donetsk administration reports of the sounds of shelling in many parts of the city on Sunday.

"As of 17:30 (15:30 GMT) there is tension in Donetsk. Sounds of heavy weaponry can be heard in many parts of the city… Casualty figures are not available," the Donetsk administration said in a statement published on its official website.

Earlier on Sunday, deputy commander of the self-proclaimed Donetsk People's Republic (DPR) militia told RIA Novosti that one civilian was injured in the Ukrainian forces' mortar shelling of a residential district in Donetsk.

Meanwhile, the OSCE Special Monitoring Mission (SMM) reported earlier on Sunday that several ceasefire violations since the introduction of a "silence regime" in early December were recorded in Donetsk over the past weeks.

© AP Photo / Dmitry Lovetsky
OSCE Reports Increase in Ceasefire Violations, Casualties in East Ukraine
In September, Kiev and east Ukrainian militia reached a ceasefire deal in Minsk following months of bloodshed, but have since accused each other of violating the truce. Ukrainian President Petro Poroshenko introduced a "silence regime" in a bid to renew ceasefire efforts, which led to fresh rounds of Minsk format negotiations brokered by Russia and the Organization for Security and Co-operation in Europe (OSCE) later in December. The sides agreed on prisoner exchanges and the withdrawal of heavy artillery from the line of contact.
...
Reddit
Google+
Blogger
Pinterest
StumbleUpon
Telegram
WhatsApp
23
Topic:
Situation in Ukraine After Ceasefire Agreement (450)