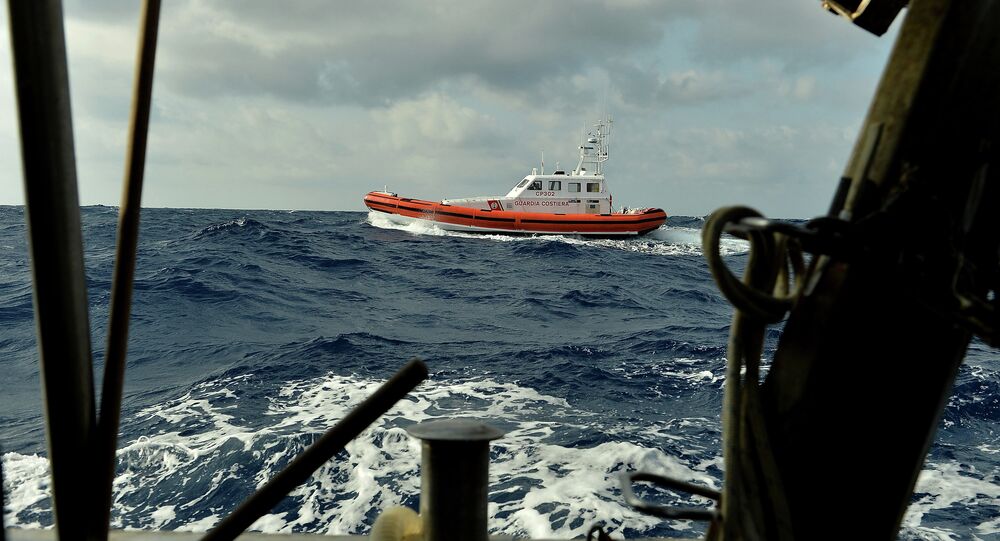 The European Union is determined to take resolute action against smugglers, a decision following the rescue of the abandoned vessel Ezadeen with 450 migrants on board.

MOSCOW, January 3 (Sputnik) – The European Union is determined to take resolute action against smugglers who are employing new tactics of sending abandoned ships with hundreds on board towards European shores, said an EU commissioner.

© Flickr / Niklas-B
Italian Rescuers Save Abandoned Ship With 450 Migrants on Board
"We must not allow smugglers to put at risk people’s lives in old, abandoned ships in dangerous weather," Dimitris Avramopoulos, EU Commissioner for Migration, Home Affairs and Citizenship, said in a statement. "[W]e need to take action against these ruthless, criminal organisations," he added.

Avramopoulos promised to make the fight against smuggling "a top priority in the 'comprehensive approach to migration'", adding that they "[w]e will move forward with commitment and resolve." He also vowed to "do our utmost to protect those who seek a better life in Europe and to fight smugglers" in a tweet.

The EU commissioner said that "[s]mugglers are finding new routes to Europe and are employing new methods in order to exploit desperate people who are trying to escape conflict and war." These developments call for "decisive and coordinated EU-wide action."
The statement comes after the Italian coastguard rescued the Ezadeen, an abandoned ship with 450 migrants on board, in the second of such operations in a week. Avramopoulos praised the Italian Coast Guard and Frontex, an EU agency responsible for security of EU borders, for "[saving] hundreds of migrants in distress" on his official Twitter account.

I commend the Italian Coast Guard and #Frontex who have saved hundreds of #migrants in distress http://t.co/ciCvNoOYlr #Ezadeen #BlueSkyM

The majority of people on the Ezadeen, a livestock vessel sailing under the Sierra Leone flag, are reportedly from war-torn Syria, according to AFP, citing Italian media. They were "visibly distressed but overall in good medical condition," Frontex said in a statement. The agency added that the people were given food and water and received basic medical assistance.

Corigliano Calabro: preparations being made for arrival of migrants on rescued #Ezadeen pic.twitter.com/VrJ0Ux86qm

Days earlier, another ship, Blue Sky M with more than 750 people onboard, was rescued by the Italian coast guard after it was abandoned by its crew.

© Flickr / Niklas-B
UN Appalled by Ship Crews Abandoning Migrants in Mediterranean
These two incidents fuel fears that smugglers have found a new, inhumane tactic to make profits, exploiting hopes of those seeking better life.
"It’s an extraordinary way to treat people," said Leonard Doyle, a spokesman for the International Organization for Migration. "The abandonment of ships in the high seas is a very dangerous thing to do at the best of times and takes the smuggling game to a whole new level that we've never seen before," he stated, as quoted by the Guardian.

"It’s almost as if [the smugglers] are playing chicken with the lives of vulnerable people – men, women and children who are fleeing war – and seeing who blinks first. … But they know full well that the Italian coastguards will have to intervene," Doyle explained.

The Italian authorities have rescued over 170,000 people at sea in the last 14 months, according to AFP.

Corfu: Ship With 600 Migrants on Board Sends SOS Signal