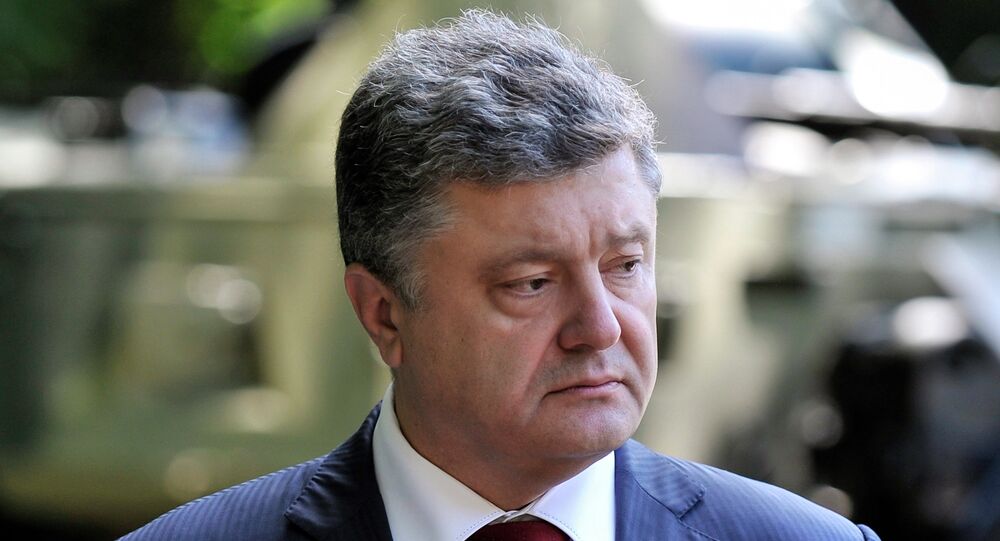 The Ukrainian president described the outgoing year as the most difficult one in Ukraine's past 70 years that followed the 1941-1945 Great Patriotic War.

© Sputnik / Nikolay Lazarenko
Ukrainian President Poroshenko Signs 2015 Budget
KIEV, January 1 (Sputnik) — Ukrainian President Petro Poroshenko said in his New Year's Eve address to the nation that the year 2015 will turn the page to the next chapter of the country's EU membership bid, which includes a wide range of reforms.

"The year 2015 will not be an easy one, and I believe it will go down in history as a year of in-depth reforms that will put us on track toward EU membership. It is our dream that we will make come true together. But today, I would mostly like to wish for a long-awaited and lasting peace," Poroshenko said.

The Ukrainian president described the outgoing year as the most difficult one in Ukraine's past 70 years that followed the 1941-1945 Great Patriotic War.

© Sputnik / Valeriy Melnikov
Contact Group Meeting on Ukraine Crisis Kicks off in Luhansk
"We will win this patriotic war too," Poroshenko pledged, referring to the ongoing armed conflict in eastern Ukraine where pro-Kiev troops continued to clash overnight with pro-independence militia.

The Contact Group's initial Ukraine meetings took place in Minsk on September 5 and 19, and resulted in a ceasefire agreement between Kiev and the two breakaway republics, although the parties have repeatedly accused each other of violating the truce.