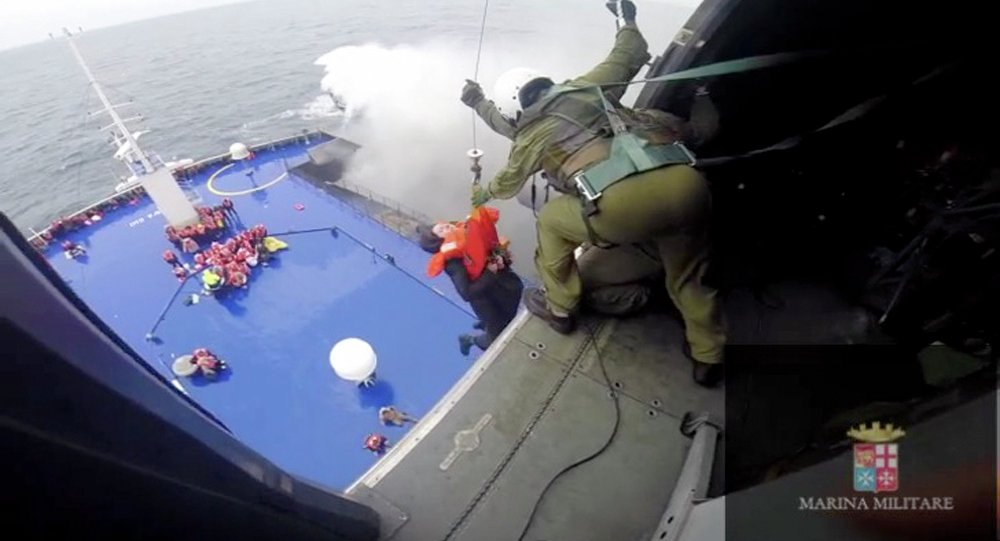 290 people saved from the burning ferry Norman Atlantic, 188 are still on board the ship, according to the Italian Navy.

© East News / AP Photo/Kostas Tsironis
211 People Rescued, 267 Still on Board Norman Atlantic Ferry: Italian Navy
MOSCOW, December 29 (Sputnik) — Rescue efforts continue Monday for the 188 passengers still on board the burning ferry Norman Atlantic in the sea between Italy and Greece, while 290 have already been saved, the Italian Navy stated.

"290 people saved, 188 still on board Italian navy's ship De La Penne will be on scene at 9am," the Italian Navy posted on Twitter.

#Breaking update 7.40am #NormanAtlantic rescue: 290 people saved, 188 still on board Italian navy's ship De La Penne will be on scene at 9am

The Italian Coast Guard reported that one man has died on the burning ferry and two people are injured.

The Greek Shipping Ministry reported that a group of doctors have boarded the ferry, but there is still no information about the injured passengers and crew still on the ferry.

© AP Photo / Italian Air Force
One Dead, Two Injured Aboard Burning Italian Ferry: TV
The ministry, citing Italian authorities, said that water, blankets and other essentials have been delivered to the Norman Atlantic.

The fire on the Italian-flagged ferry, which was traveling from Greece to Italy, broke out early Sunday morning from the ship's garage unit.

Later on Sunday, the ferry was taken under tow, with the fire on board partially under control. The rescue operation started at night and is being coordinated from the San Giorgio, an Italian Navy ship.