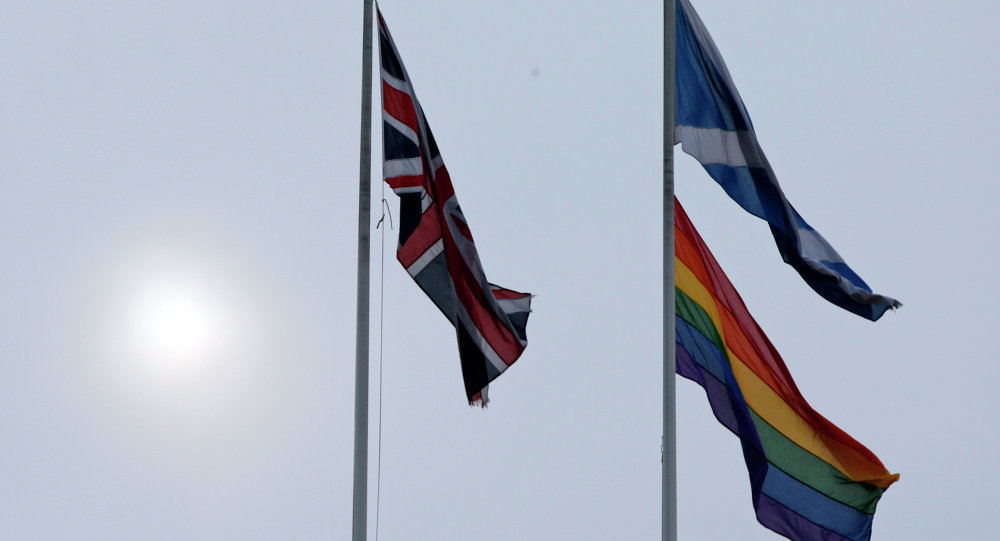 The number of hate crimes motivated by transphobia has risen tremendously in the UK this year. However, experts warn that the real numbers are much higher, since crimes against transgender people are "massively under-reported."

© AP Photo / Aaron Favila
US Marine Charged by Philippine Authorities in Transgender Murder
MOSCOW, December 26 (Sputnik), Ekaterina Blinova — The number of hate crimes against transgender people in the UK has risen in 2014, according to British police authorities.

"The Metropolitan police, the country’s largest force, saw offences against transgender people soar by 44% in 2014, with 95 crimes recorded – up from 66 last year and 59 in 2012. They included 53 harassment offences this year, 17 common assaults, seven grievous bodily harm offences and seven assaults with injury," the Guardian noted, adding that police also registered rape, robbery and criminal damage cases this year.

Alarmingly, police officials pointed out that they recorded more hate crimes against transgender people between January and November in 2014 than during the whole of 2013, according to data released by the Press Association under the Freedom of Information Act.

However, experts note that the real numbers of offenses may exceed the officially released figures, warning that crimes against transgender individuals were "massively under-reported."

© REUTERS / Suzanne Plunkett/Files
UKIP Restricts Tweeting After Damaging Series of Racist, Homophobic Remarks
"A third of trans people in the UK go through transphobic abuse every year. That’s the second highest of any EU country. Yet only a few hundred transphobic crimes get recorded by the police each year. That has got to be a tiny fraction of the true number," said Serge Nicholson, the Galop charity representative as quoted by the Guardian.

"As much as 80 percent of transphobia is not reported. So the rise in transphobic police recording can be viewed as encouraging, though it leaves us with mixed feelings. One transphobic hate crime is one too many," he added.

The Guardian emphasizes that the Association of Chief Police Officers share the stance of the charity. Chief Constable Jane Sawyers admitted that transphobic crimes had been "under-reported," adding that transgender people abuse was "totally unacceptable."

© Flickr / Guillaume Paumier
Human Rights Groups Protest as Indonesia Passes Anti-Homosexuality Law
"Targeting someone because of their sexual orientation or gender identity is totally unacceptable. This abuse affects people's fundamental right to feel safe, secure and confident about themselves," she said as quoted by the Guardian.

"We strongly encourage anyone who has experienced transphobic hate crime to report incidents to the police," Chief Constable Jane Sawyers underscored.

It should be noted that earlier this month the Independent pointed out dramatic rise in number of hate crimes motivated by racism, anti-Semitism, religion and homophobia in Britain in 2014, particularly in London. On the whole, the overall number of hate crimes in the capital of the UK rose by more than 20 percent since last October, the media outlet stressed.