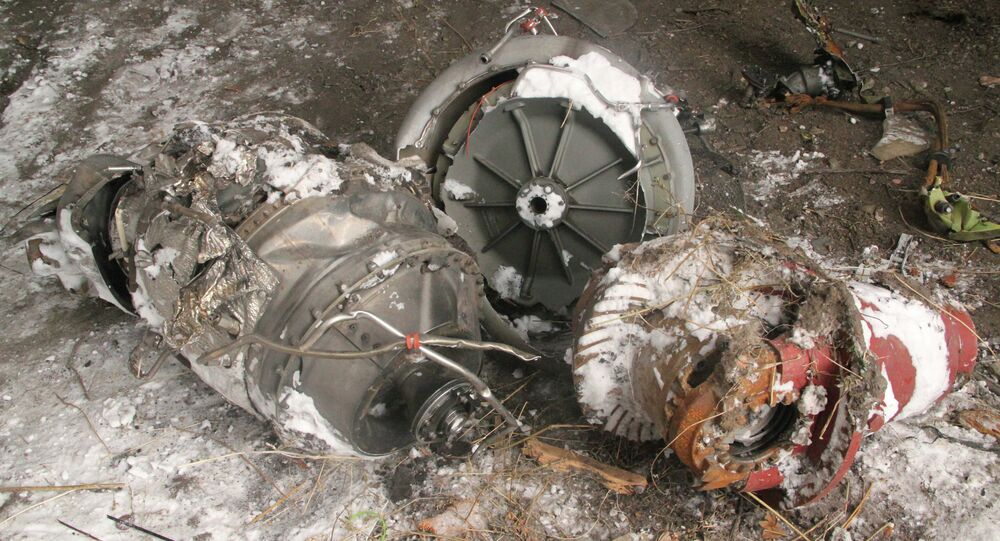 Ministry of Defence of Ukraine
Ukrainian Combat Jet SU-25 Took Off With Missiles, Returned Without Them on Day of MH17 Crash: Reports
DONETSK, December 25 (Sputnik) – The downing of the Malaysian Airlines passenger plane by Ukrainian jets in July was seen by dozens eyewitnesses, the leader of the eastern Ukrainian self-proclaimed Donetsk People’s Republic said Thursday.

“I saw it all happen. There were two planes and the Boeing. Then two planes flew off and the Boeing fell. The DPR didn’t shoot down the plane for two reasons. First, we are people and not beasts, and second, we don’t have the technical means [to do this],” Alexander Zakharchenko said during a press conference in the republic’s capital.

“I saw this with my own eyes. I was driving by the city of Shaktersk. And if necessary, there are several dozens of witnesses who saw the same thing…I knew immediately that the plane was shot down by Ukrainian planes. We don’t have any aviation,” Zakharchenko added.

© Sputnik / Andrei Stenin
Lie Detector Verifies Eyewitness Testimony That Ukrainian Su-25 Was Involved in MH17 Crash
On July 17, Malaysia Airlines flight MH17, en route from Amsterdam to Kuala Lumpur, crashed in eastern Ukraine, killing all 298 people on board. In September, the Dutch Safety Board released a preliminary report on the incident saying that the plane had been hit by numerous high-energy objects and broke up in mid-air.

The Kiev government accused the independence supporters of Ukraine's eastern regions of shooting down the aircraft. The latter denies the allegation saying they were not in possession of weapons capable of downing a plane flying at the altitude of some 30,000 feet.

© Sputnik / Mikhail Voskresensky
Su-25 Pilot Allegedly Behind MH17 Downing Not on Duty on July 17: Kiev
On December 23, Komsomolskaya Pravda newspaper published an interview with Ukrainian airbase employee, who said he knew how the Malaysian Boeing crashed.

The employee, who claims to be an eyewitness, said a Ukrainian air force Su-25 combat jet took off from an airbase in eastern Dnipropetrovsk carrying air-to-air missiles and returned without them on the day a Malaysia Airlines plane crashed in eastern Ukraine.

The airbase worker said he remembered the pilot saying "the wrong plane" and "the plane was in the wrong place at the wrong time" after he returned from the flight.

Ministry of Defence of Ukraine
Ukrainian Su-25 Pilot Should Take Polygraph Test: Russian Investigators
He did not exclude the possibility that the Su-25 pilot could confuse a Boeing passenger airliner with a military jet.
© Sputnik / Masha Ross
Lavrov: International MH17 Crash Investigation Violates ICAO Rules
On December 24, the Russian Investigative Committee said that a polygraph test had verified claims by a former Ukrainian airbase employee who suggested earlier this week that flight MH17 was possibly downed by a Ukrainian air-to-air missile carried by a Su-25 aircraft.

The witness identified the Su-25 pilot as Capt. Vladislav Voloshin. The committee called on the Ukrainian Su-25 pilot to take a lie-detector test.

The Ukrainian Security Service (SBU) confirmed the same day that Voloshin served in the Ukrainian Air Force, but said was not on flight duty on the day when the Malaysia Airlines plane crashed in eastern Ukraine.