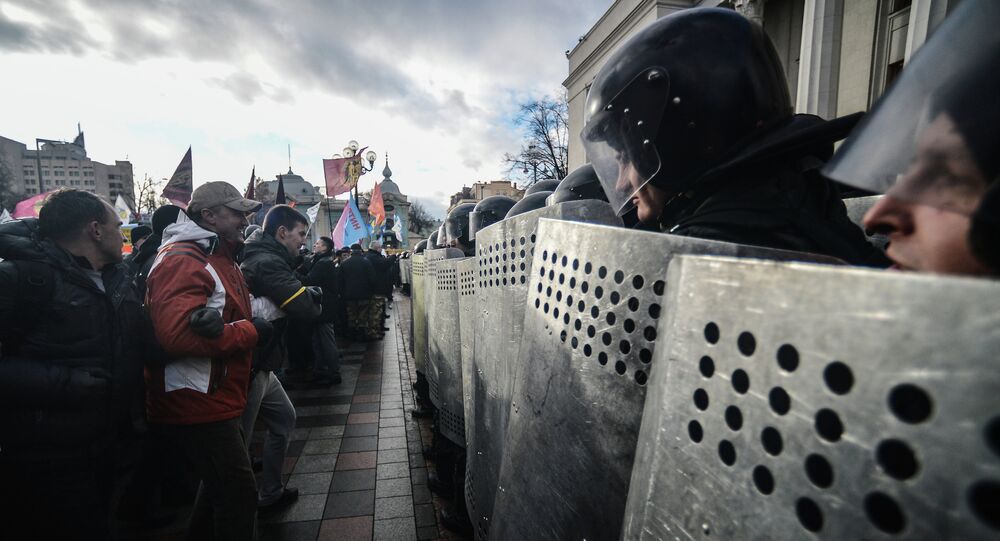 © Sputnik / Egor Aleyev
Russia to Halt Gas Sales to Ukraine if Kiev Fails to Repay $1.65Bln: Energy Minister
MOSCOW, December 23 (Sputnik) – A crowd of thousands gathered on Tuesday outside the parliament building in Kiev to show their opposition to cost-cutting measures proposed by the government of Ukraine.

"First of all, they want to pass a budget, with which the majority of people gathered here today are dissatisfied, and they want to extend the powers of the National Security and Defense Council of Ukraine," Vitaly Yahno, the coordinator of the protest told the Ukrainian UNN news website. "And our task – is to ensure that the laws are passed, which we submitted."

"The 'Financial Maidan' is demanding the passing of legislation which has already been registered, but they [the authorities] don't want to put them on the agenda," Yahno explained.

© Sputnik / Maxim Blinov
Ukraine's Decision to Cancel Non-Aligned Status Big Mistake: Moscow
However, one protestor told Kiev News that the protestors were ready to take their demonstration to the next level: "If our demands are again ignored we are ready to take radical measures. We are addressing you, the servants of the people. You have already done everything, so that we don't have anything more to lose," adding that the protest was waiting until two p.m. for a response.

UNN reports that the demonstration began last week, when around 400 borrowers and investors from across Ukraine marched to the building of the Ukrainian National Bank and demanded to meet with the central bank's head, to ensure the passing of laws to regulate bank credit and deposits. The demonstrators also demanded to meet with the Ministers of Finance and Justice, and with Ukrainian Prime Minister Arseniy Yatsenyuk.

RIA Novosti's correspondent reported that during the course of the day's demonstration other movements also joined the protest, including representatives from Ukrainian trade unions, and supporters of the Svoboda party. Slogans heard from the crowd included "The National Bank is seeping hryvnia," and "Lviv is against being at the mercy of the banks."

On Tuesday, the Ukrainian parliament is due to hear around 40 legislative proposals for the 2015 budget from the Ukrainian government, which include sharp cuts comprising pay freezes, pension reductions and the abolition of educational and healthcare benefits.