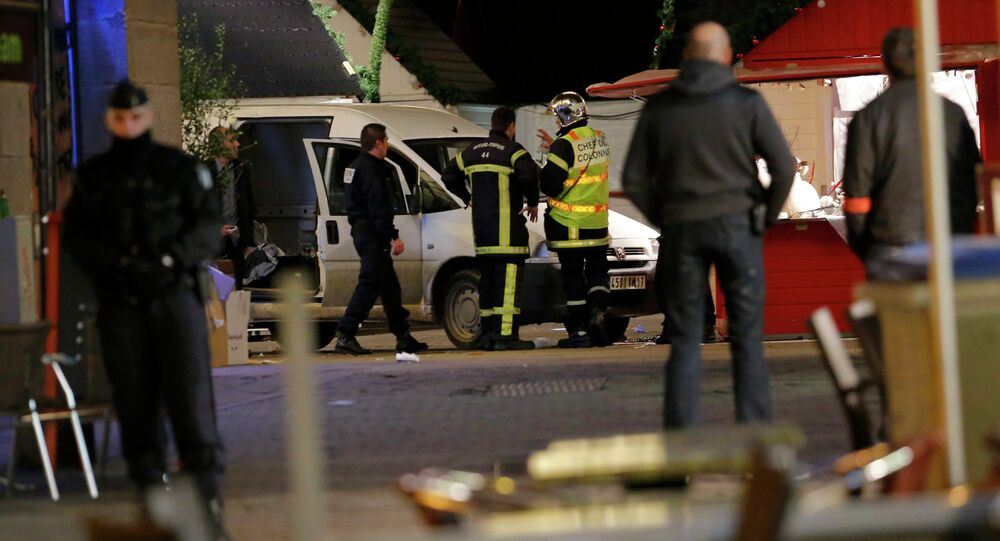 © AP Photo / Christian Guileminot; Le Bien Public
France Targeted in Second 'Allahu Akbar' Attack as Driver Plows Into Crowd
MOSCOW, December 23 (Sputnik) – Ten people were hurt and four of them sustained seriously injuries when a minivan crashed into a Christmas market in the French city of Nantes on Monday.

The driver then seriously wounded himself when he attempted to stab himself at least nine times, AFP quotes a source close to the investigation as saying.

The incident happened at about 7 p.m. when many people were visiting the market, shopping for their Christmas gifts.

The crash occurred a day after a mentally unstable man shouting "Allahu Akbar" deliberately drove into a crowd of pedestrians in the French city of Dijon, injuring at least eleven people.

On Saturday a 20-year-old man was fatally shot by police after stabbing three officers in a rampage at a police station. He also shouted "Allahu Akbar".

Authorities were quick to stress there were no apparent terrorist motives in the Christmas market attack, according to AFP.

“We cannot speak of a terrorist act," the agency quotes local prosecutor Brigitte Lamy as telling reporters at the scene of the latest incident, saying that initial evidence pointed instead to an "isolated case".

Interior Minister Bernard Cazeneuve said the attacker appeared to be "unbalanced" and not motivated by politics or religion.

President Francois Hollande has asked the Prime Minister to convene an emergency cabinet meeting on Tuesday to discuss the attacks.

Hollande has urged the French public not to panic, while Prime Minister Manuel Valls reiterated an appeal for 'cool-headedness'.