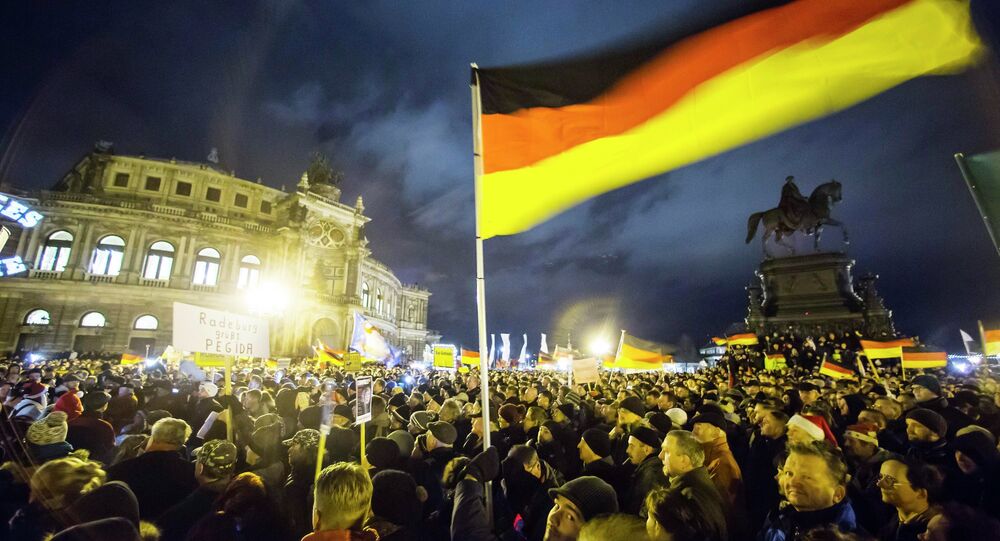 A record 17,500 people took to the streets of Dresden to protest the “Islamization of the Occident” on Monday, making it the largest such gathering in the past ten weeks.

The organizer of the demonstration, "Patriotic Europeans Against the Islamization of the Occident,"  (Patriotische Europäer gegen Islamisierung des Abendlandes in German) or PEGIDA has been setting up similar protests over the past ten weeks to condemn what they see as the increasing impact of Islamic culture on Germany.

The group estimates that over 20,000 people have shown up.

© REUTERS / Hannibal Hanschke
Patriotic Europeans against the Islamisation of the West

"Incredible Dresden! Well above 20,000 people! It was OVERWHELMING! Thanks a lot to those who made a long way to come here! Have a safe trip back home! You are all very important! WE ARE THE PEOPLE! DRESDEN SHOWS HOW IT SHOULD BE! Merry Christmas!» Pegida said in a post on the group’s Facebook page.

The management of the opera house demonstrated its distaste by turning the building's lights off and flying flags outside that read: "Open your eyes", "Open your hearts", "Open doors" and "The dignity of the human being is inviolable," the first line of German Basic Law, the country's constitution, according to Deutsche Welle reports.

The anti-Islamization movement has been recently accused of neo-Nazi sentiments. But PEGIDA followers insist they had no Nazi connections and call themselves "patriots" concerned by the "watering down" of Germany's Christian-rooted culture and traditions.

The demonstrations, however, sparked the opposition into action.

Around 4,000 counter-demonstrators marched through Dresden under the slogan "Nazi-free," warning there was no place for racism and xenophobia in a country marred by racial hatred during World War II.

Ironically, Adolph Hitler had a positive impression of Islam, according to his personal architect Albert Speer, who addressed the matter in his best-selling 1970 book, Inside the Third Reich. According to Speer, Hitler believed the warlike religion of the Arabs was more suited to Germany than Christianity, "with its meekness and flabbiness".

Bonn saw both an anti-immigration rally organized by the group BOGIDA (Bonn against the Islamization of the Occident), which attracted several hundred followers, and a larger counter-rally with thousands of demonstrators.

Germany has been the most refugee-friendly of all the EU nations, according to data obtained by the UN human rights commission’s refugee agency in Berlin.

Most refugees coming to Germany are from conflict-hit Muslim countries such as Syria, Iraq and Afghanistan, as well as several African and Balkan countries.