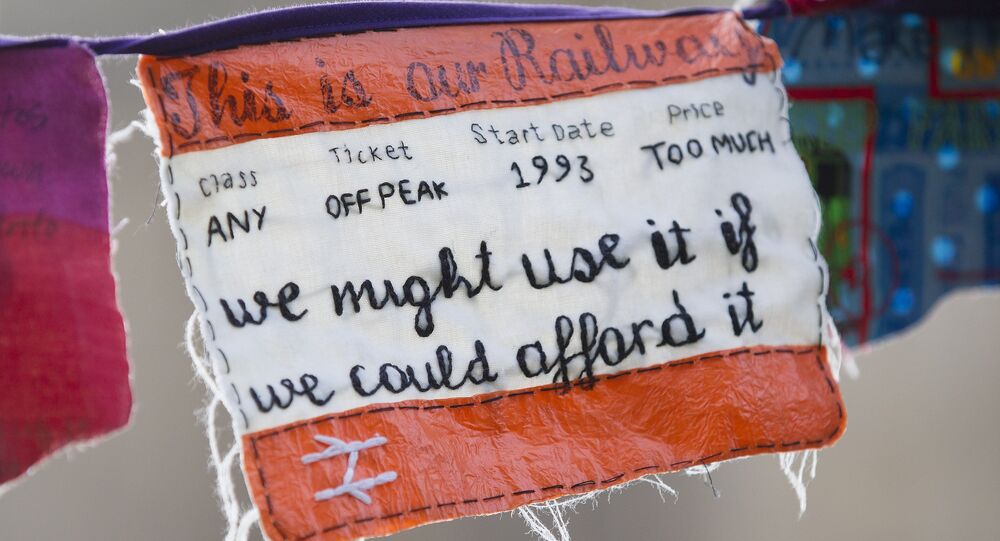 Robbed Blind: Why Britain Is So Expensive

British households would save around £250 a year if energy, water and rail were in public ownership, research says. But even that is a rather conservative figure as it doesn’t include all the services which have been privatised and which we are being overcharged for.

A new survey by the research group Corporate Watch in association with We Own It reveals that Britons pay much more for basic services and utilities because they are privatised.

Let's start with rail. We have by far and away the highest train fares in Europe. Journeys of between 100 and 150 miles are six times more expensive than in Belgium, a country where the railways have not been privatised.

Manuel Cortes, head of the Transport Salaried Staffs' Association union has pointed out that it's cheaper for a family of four to fly to Iceland to see Father Christmas (for £224) than for one person to buy an anytime walk-on rail fare from London to Manchester, which costs £321. Just how crazy is that?

Not only are our rail fares the highest (oh and by the way they're going up again by an above inflation 2.2% in the New Year) but there's a 'double whammy', as our train operators receive generous taxpayers subsidies to run the services which they then charge us an arm and a leg to travel on. The five largest private train companies received nearly £3 billion in taxpayer support between 2007 and 2011.

Is the Bus Fare Fair?

Those of us who can remember the 70s and 80s will recall how neoliberals used to attack British Rail,  the state-owned train operator, for being ‘inefficient' and a drain on the public purse. Yet our privatised rail companies have received up to five times more in public money than British Rail did.

What makes the situation even more ludicrous is that many of our rail franchises are now run by state-owned firms from other European countries, who charge British passengers more than they do passengers back home.

Our buses too are ridiculously expensive compared to other European countries. Again we're being ripped off twice — we not only have to pay exorbitant bus fares, but hand over huge sums to the private bus operators in subsidies — a total of £2.19bn in 2012/13. A report published earlier this year by the Institute for Public Policy Research found that non-London bus fares rose by 35% above inflation between 1995 and 2013. In many countries buses are still the cheap option of getting from A to B, but not in Privatised Britain.

It's a similar story of ripping off the public when we look at gas, electricity and water. A report published in October showed that our spending on gas and electricity had risen by 52% above inflation in less than ten years despite us actually using less. Average water bills in England — where water is privatised — rose by up to 83% from 2003/4 to 2013/14. Do you know anyone whose wages rose by that amount during that time period? No, me neither.

Not surprisingly, seeing the major hikes in the prices charged to us by service providers, we've seen a big increase in profits. Some water companies' profits have doubled in a decade. Corporate Watch has found that the UK's private water and rail companies, the electric and gas transmission and distribution companies, and the 'Big Six' energy generation and supply companies, together paid out more than £12.7bn to shareholders and lenders in dividends and interest in 2013. Remember that the next time you buy a train ticket or receive your gas and electricity bill.

It's clear that if British politicians are genuinely keen on lowering the cost of living they ought to be renationalising, not privatising still further. But that's exactly what they're doing. Only last year we had the flogging off of the Royal Mail — in state hands since its inception in the 16th century — for at least £1bn below its true value.

The East Coast rail franchise, such a success in public ownership, has been handed over by the Coalition government to a consortium of Stagecoach and Virgin. The government has hived off health services, previously provided by the NHS, to the private sector and has even mooted the idea of privatising our roads with David Cameron holding up the privatisation of water in England as a successful model!

Even Labour, as yet, haven't advocated re-nationalisation — only the setting up of a publicly owned rail operator to bid for franchises.

While Living Standards Stagnate or Fall

The political elite's pro-privatisation stance is shocking, ludicrous and anti-democratic but it's unsustainable in the long run. As evidenced by recent polls, public opinion is strongly for re-nationalisation and as living standards continue to stagnate or fall so the pressure on the main parties to change course will grow.

The Thatcherites used to claim that we could not afford to have nationalised industries as they cost the country too much. But now it is becoming ever clearer that we can't afford to have our trains, buses, gas, electricity and water in private hands.

For far too long being polite Britons who don't like to complain too much, we've accepted being ripped-off for services that could be provided much cheaper in house. With none of the main parties committing to revisiting the issue of privatisation, the fare and utility bill paying voter doesn't have much choice at the upcoming election. While a party that does come up with a clear plan of action on Britain's private profiteers would be likely to see a significant surge in support.