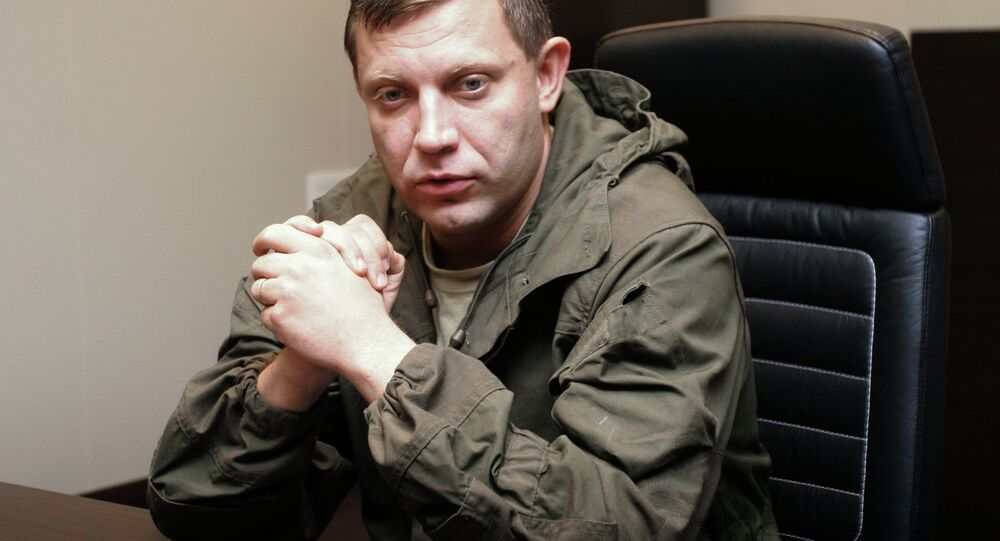 Head of the self-proclaimed Donetsk People's Republic (DPR) Alexander Zakharchenko said the Ukrainian government in Kiev is sabotaging the Minsk talks; He is not sure when Minsk negotiations will continue.

MOSCOW, December 20 (Sputnik) — Kiev authorities are sabotaging the upcoming negotiations in Minsk and do not wish to discuss peace settlement with the militia in eastern Ukraine, head of the self-proclaimed Donetsk People’s Republic (DPR) Alexander Zakharchenko said Saturday.

© Sputnik / Egor Eryomov
Kiev Wants to Abandon Minsk Peace Agreements: DPR Envoy
“The Ukrainian side is sabotaging the Minsk talks, they don’t need to speak with us about peace,” Zakharchenko told reporters.

A new meeting of the so-called Contact Group on Ukraine, comprising representatives of the Donetsk and Luhansk people’s republics, Kiev authorities and the Organization for Security and Co-operation in Europe (OSCE), was initially scheduled for December 21.

According to the DPR head, it is now unknown when Minsk negotiations will continue.

Meanwhile, the self-proclaimed republic’s negotiator at the peace settlements, Denis Pushilin, stated that “all questions remain open” on the details around a new round of talks.

© Sputnik
Kiev, DPR May Start All-for-All Prisoner Swap on Dec. 25: Donetsk Official
“We even specifically asked whether there would be a continuation to the Skype talks, but there was no answer. And last night Ukrainian television suddenly began talking about the alleged renewal [of talks]. Try and understand Ukraine after this,” he was cited as saying by the Donetsk news agency.

“None of the parties, including the OSCE, have contacted me since yesterday’s video conference,” Pushilin added.

DPR, LPR, Kiev and OSCE representatives held a Skype conference on Friday to prepare for further negotiations in Minsk.

For months, a violent conflict has raged in eastern Ukraine as Kiev-led forces have fought the Donbas independence supporters. In the beginning of December, Ukrainian President Petro Poroshenko announced that a “silence regime” would begin on in the conflict-torn region on December 9 in a bid to renew peace negotiations.

The conflicting sides reached a ceasefire agreement during a September 5 meeting of the Contact Group and signed a memorandum specifying the implementation of the ceasefire on September 19, but have subsequently accused each other of breaking the truce.

Minsk Talks Date in Dispute as DPR Insists on December 12