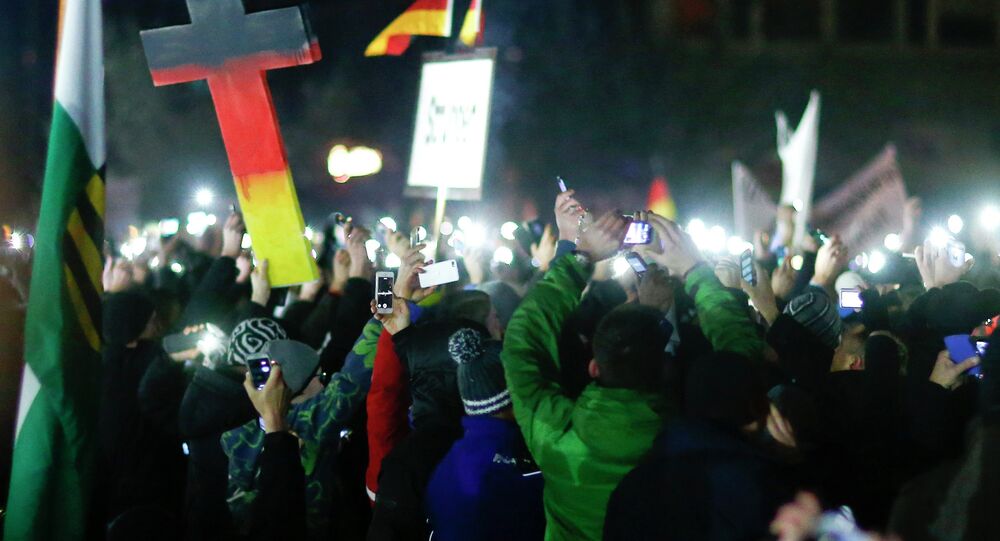 Many anti-Muslim protests demonstrations are organized by people, who just want to express their racist and discriminating views.

MOSCOW, December 20 (Sputnik) – The threat of Islamist extremism is being misused by some people to cast a shadow on the religion as a whole, along with certain countries in particular, said chairman of Germany's Central Council of Jews, Josef Schuster, cited by Deutsche Welle.

Such trend is absolutely inadmissible, Schuster claimed, calling the idea of Islam taking over the whole German nation ridiculous.

© REUTERS / Hannibal Hanschke
Anti-Islam Protests in Germany Cause Public Backlash on Social Media
"Of course Islamist extremism needs to be taken as seriously as other extremist trends," he said. "But the security authorities have long been aware," he added, cited by the newspaper.

Schuster claims that the anti-Islam mass demonstrations are organized by people, willing to express their xenophobic views. Such movements like PEGIDA, also known under the full name "Patriotic Europeans Against the Islamization of the West", pose significant danger to the country as they have racist and discriminating orientation.

Over the past few months, several anti-Islam mass protests have taken place in Germany. The largest of them was a PEGIDA demonstration in Dresden, where 15 000 people gathered to protests against the alleged Islamisation of Germany and constantly rising migrant numbers. Demonstrators were holding posters with slogans “Stop the Islamisation” and “Protect our homeland”, according to the Guardian.