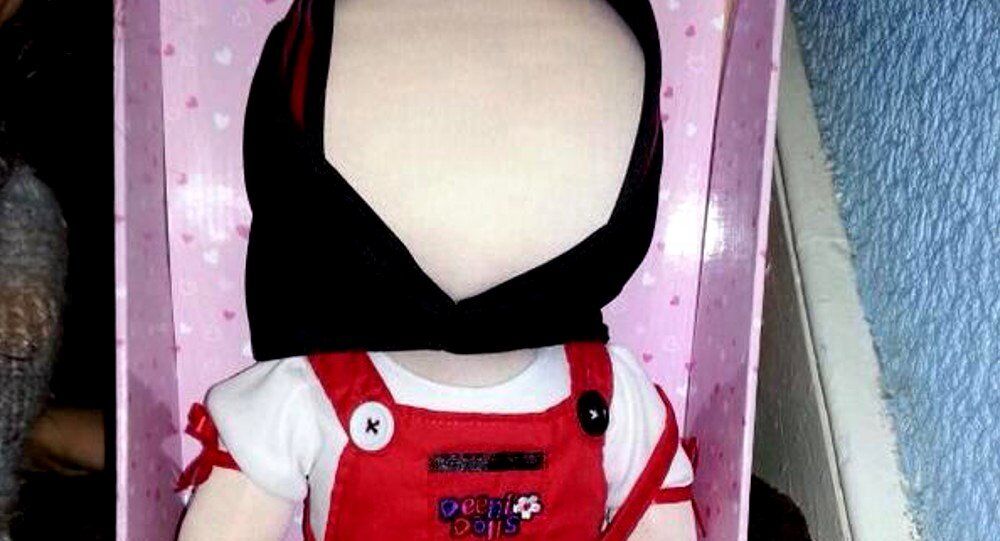 The Doll Without A Face

A new doll, produced in accordance with Islamic law, has been launched in Britain. The "Deeni Doll" is clothed in a traditional hijab headdress and its face is entirely blank, in order to comply with Islamic restrictions on the depiction of facial feature

The toy has already been called "creepy" and "eerie". It's also attracted praise — and a number of orders.

The doll's "face" is made of soft, pale fabric and it's completely blank. It looks more like a pin cushion than a person.

The "Deeni Doll" — as it is called — took four years to finish. It's the brainchild of Ridhwana B, a former teacher at a Muslim school. She enlisted a Leicester scholar to help with the design, to make sure it was fully in line with sharia teaching.

Named "Romeisa" — after a companion of the prophet Muhammad — the doll retails at £25.

Speaking to her local paper, Ridhwana B said: "Some parents won't leave a doll with their children at night because you are not allowed to have any eyes in the room. The Islamic range in kids' toys is quite limited at the moment, with few choices."

Ridhwana says there's an Islamic ruling which forbids the depiction of facial features.

It's an interpretation known as aniconism, which teaches devout Muslims to avoid depictions of humans and animals, in any medium. The teaching is thought to stem from the belief that man should not create or worship idols — that man-made depictions may lead to false worship, or distract people from their focus on Allah. There is also the notion that Allah is the sole Creator and it's over-reaching for man to try to imitate this.

Creating dolls with a human or animal outline has explicit exemption from the rules — providing they have no features — on the basis of stories that the Prophet Muhammad's wife, Aisha, played with dolls. They're thought to have a valuable social purpose, teaching young girls how to care for children and livestock. So it's therefore OK for the "Deedi Doll" to have a human body, and normal clothes.

Certain religious authorities have suggested that observant Muslims burn the faces off their dolls — so their children can comply with sharia and still have something to play with.  There's clearly an appetite for ready-made alternatives.

Ridhwana B says she's simply catering to a need. But her doll has already sparked controversy.

The requirement that dolls be faceless is not restricted to the Muslim faith. Amish children also play with featureless — and usually hairless — dolls. A recent sociological study says that's because the Amish believe "all are alike in the eyes of God" — and, as with sharia guidelines, the lack of facial features agrees with the Bible's commandment against graven images.

Indeed, children have always played with dolls that are religiously themed.

A former Goldman Sachs banker recently created a "Talking Muslim Doll". About eighteen inches tall and available in male and female versions, his dolls have big Disney-style eyes, broad smiles and they wear Western-style clothes with the odd Muslim flourish — the boy doll, for instance, wears a mosque cap. They speak various phrases — in Arabic — if you squeeze their foot, like "My name is Aamina and I am a Muslim".

Yet Ridhwana seems to be causing more of an outcry.

That's partly because sharia, the Islamic code of behaviour and law, has become an electric term in the language of British — and European — politics.

In a recent poll, forty per cent of Muslim Britons said they liked the idea of sharia being applied in parts of Britain: it's a defence of their faith against erosion from a secular surrounding culture. Meanwhile, Germany is currently seeing a burgeoning anti-sharia movement. It poses dilemmas.

Britain is a democracy that prides itself on allowing full religious freedom. It's difficult to address sharia without infringing on that liberty. If a young Muslim girl wants to play with a faceless doll because it's intrinsic to her faith, for example, that should be no-one's business but her own.

But there are fears that sharia is creating a parallel legal system, and getting in the way of social integration. Some academics argue that when young children are presented with toys like the "Deeni Doll" it amounts to conditioning — and so begins a lifetime of cultural and religious separation.

Then, there's the matter of the vexed relationship between religious observance — and profit. Entrepreneurs have always spied opportunity in people's desire to be good — but the thought of "cashing in" on religiosity can be uncomfortable. Some might wince at the "Deeni Doll's" £25 price tag. But then Ridhwana has worked on the doll for four years and its "high-quality" is a selling-point.

The "Deeni Doll" has also been criticized by Muslim scholars. Sputnik spoke to Professor Fawaz Gerges, who specialises in Muslim societies at the London School of Economics. He says the doll will not appeal to the majority of Muslims, that it is "silly". "The doll is a gimmick, an ultra-conservative interpretation. My reading is that Muslim children, like other children worldwide, prefer a face, a nose, a mouth and eyes," he told us.

Meanwhile, Ridhwana is heartened by the demand for her "Deeni Doll". She is thinking about launching a wider range of products, including a book on Islamic child-rearing.