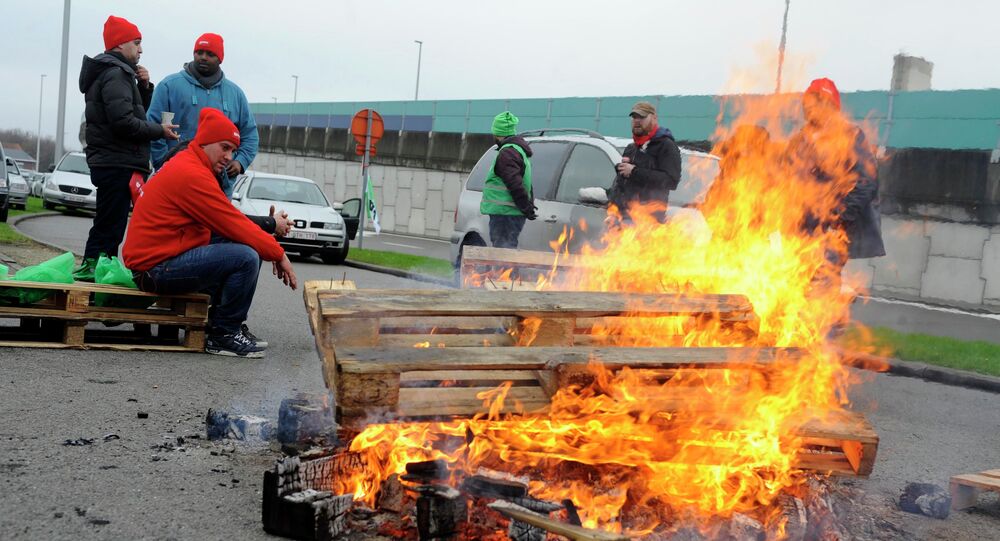 Workers in Belgium have brought the country to a standstill in the country's biggest national strike in years, over new government austerity policies, which include increasing working hours, raising the retirement age, and restricting social services.

© AP Photo / Virginia Mayo
Impending Strike in Belgium Causes Flights Cancellation
MOSCOW, December 15 (Sputnik) – Belgian trade unions are carrying out a nationwide general strike, the culmination of a month of industrial action which is to paralyze the country's public transportation as well as other public and private institutions on Monday.

One protestor at the picket line of the 1.7 million member CSC Trade Union told AFP, "Austerity measures imposed by the government will cost the economy $2.5bn, and we are denouncing it because the SNCB will not be able to support this debt, this economy."

The SNCB is Belgium's national rail operator and one target of government cuts, which will see €663 cut from its budget resulting in job losses and reductions in services. Other proposed cost cutting measures from Belgium's new center-right coalition government include raising the retirement age from 65 to 67, scrapping an automatic cost-of-living increase and public sector cutbacks, in order to save 11 billion euros over five years.

© AP Photo / Virginia Mayo
Strikes in Belgium Interrupt Work of Railroads, Port in Antwerp, Factories
The industrial action began on Sunday and has also halted international services, with Eurostar and air travel stopped by the strike, in which Belgium's air traffic control workers also took part. According to the Brussels-based EU observer, schools, government offices and private firms were all set to shut down. "Garbage will not be picked up and newspapers will not be delivered," it reported.

Brussels International Airport spokeswoman Florence Muls told AFP, "All flights are cancelled. Everything is immobilized," and estimated that 50,000 passengers and 600 flights were affected. Charleroi Airport boss Jean-Jacques Cloquet said the disruptions were a "real disaster."

"Due to the scale of the strike we expect no trains or other public transport to run in Belgium. Eurostar are unable to provide any alternative method of transport between Brussels and Lille and we strongly advise our passengers not to travel on that date," a statement on the Eurostar website reads.

Demonstrations against the government's measures first began in November when tens of thousands of trade unionists staged a general strike. In Brussels, over 100,000 demonstrators took to the streets in protest which saw clashes with police. "This is how it is. The rich are getting richer and the poor are getting poorer,” one protestor told Euronews, who had travelled from Flanders to take part in the protest.

The strike is not only affecting the capital, but many other cities in the French-speaking part of the country. Bus, ferry and metro services are also disrupted.
According to the Guardian newspaper, there have been clashes between Belgian trade union and riot police. As yet there is no information on any injuries or arrests.