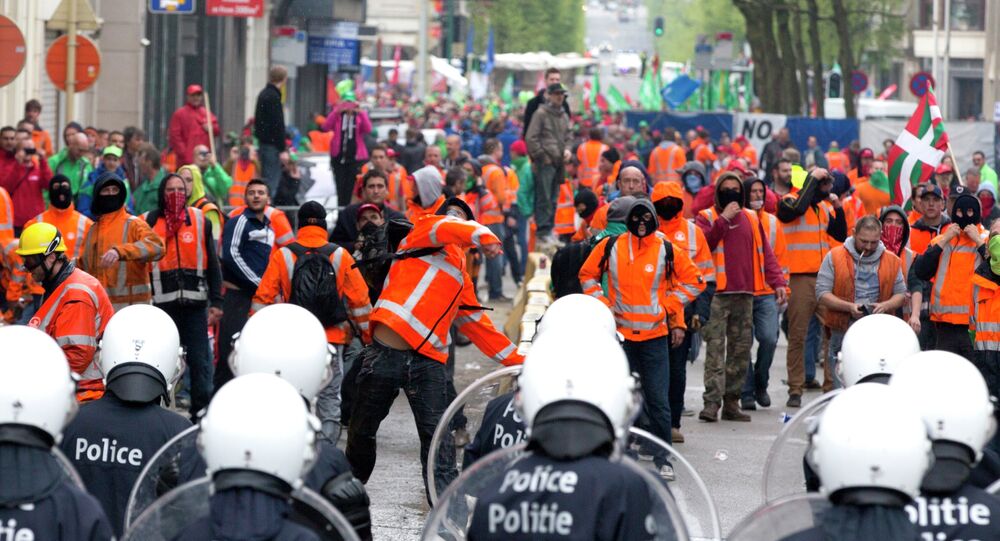 Belgian unions insist that they have no choice but to proceed with the strike, in the face of new tough austerity measures proposed by the government.

© AP Photo / Virginia Mayo
Strikes in Belgium Interrupt Work of Railroads, Port in Antwerp, Factories
MOSCOW, December 14 (Sputnik) — Belgium is prepared to come to a standstill on Monday December 15 as a national strike threatens to immobilize the country's transport infrastructure.

The nationwide strike, scheduled on Monday, will ground all flights to and from Belgium, paralyze railroad communications and halt all public transportation across the country, Press TV adds. The unions insist that they have no choice but to proceed with the strike, in the face of new tough austerity measures proposed by the government.

The strike is also likely to close offices, schools, factories and businesses.

“The Belgian government is using EU austerity targets to penalize families, employed and unemployed, students and the poorest of society rather than targeting the big capital that remains almost untouched by the government’s austerity measures,” European Transport Workers Federation said, according to Press TV.

© Flickr / Patrick Lauke
Russia-EU Tensions Should Not Affect Moscow-Belgium Ties: Foreign Ministry
The reforms, proposed by the center-right government of Prime Minister Charles Michel, include the increase of retirement age and freeze wages. According to South China Morning Post, the Belgian government hopes to save at least 11 billion euros through these measures.

The protests against the austerity measures began in November, when at least 100,000 workers took to the streets. The rally was later followed by a series of strikes.