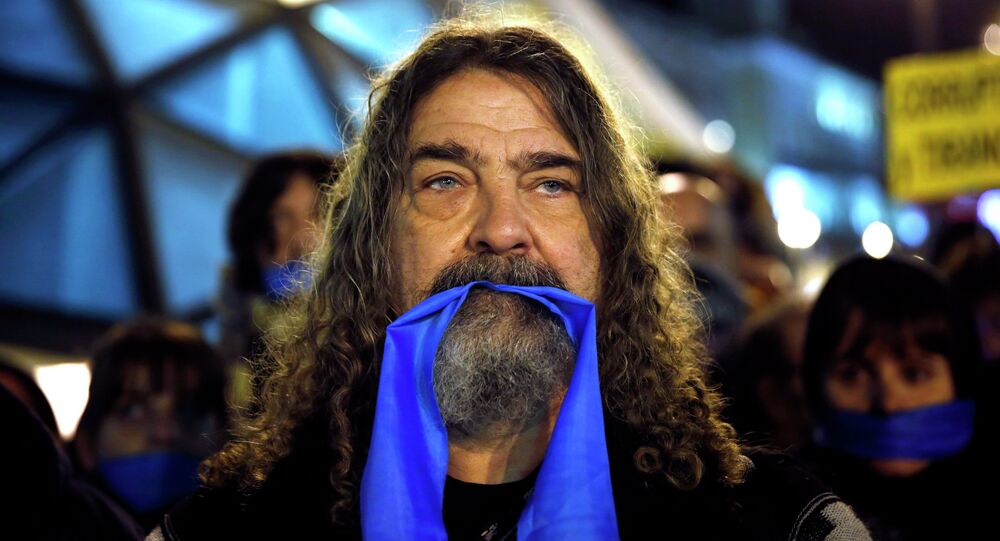 According to Amnesty International Spain, the new law decreases accountability of law enforcers in cases of abuse of power. The Citizen Security Law prohibits recording and taking pictures of police.

Serrano pointed out that the law confers more power to the police, and decreases accountability in cases where there has been an abuse of power. The new law has been dubbed the Gag Law.

"We have attended the funeral of the freedom of expression and the right to demonstrate," the poster reads.

“One of the main concerns is that this law can limit the possibility of recording and disseminat[ing] images of security forces,” Serrano said, adding that videos of police taped by activists and journalists have been integral in holding law enforcement agencies accountable for abusive practices.

The law also limits where citizens can assemble in public, making it unlawful to gather in front of governmental buildings.

© AP Photo / Paul White
Greenpeace Activists Face Tough Jail Sentence For Nuclear Protests in Spain
“It is not reasonable that people cannot show their complaints to the representatives which are in the Congress, Senate and other public organs, this is a concern for us,” Maria Serrano stated, adding that Amnesty International also seeks to legalize the kind of spontaneous public assembly made popularly through the use of social media.

On top of these concerns, Amnesty International also underlined the consequences of this law for migrants, whom the authorities would be able to deport immediately, with no opportunity to apply for asylum.

“This is completely forbidden in international law. And it contradicts many human rights conventions. So really we demand that senators repeal and amend this Aliens law,” Serrano told Sputnik explaining that the provision was included in the public security law. “So it means that by their approval of the Public Security Law, the government and the Popular Party are also changing the Aliens Law.”

The human rights organization hopes to influence Spanish decision-makers to amend the law before it is sent for final approval in the Senate in February.