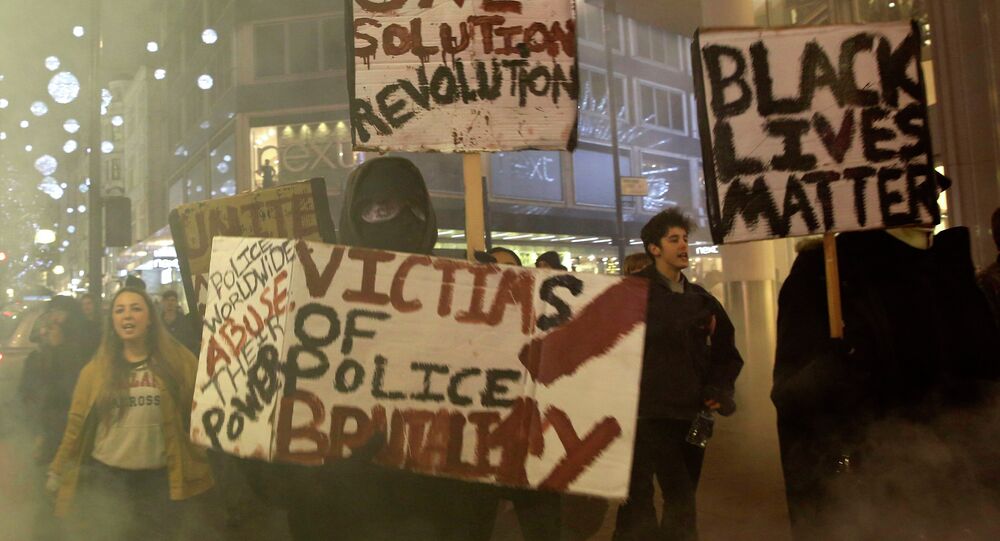 76 people protesting US police killings in a major London shopping center were arrested for assaulting security workers and causing damage to property.

MOSCOW, December 11 (Sputnik) - British police arrested 76 people during a mass protest action in one of London’s largest shopping centers, organized in support of US demonstrations against police killings and brutality, according to BBC.

Hundreds of people crowded the Westfield London Shopping Center and blocked nearby roads. Many lay down on the center’s floor, while others held posters with the words "Black lives matter" and "Hands up," slogans used by US protesters and widely prevalent on social networks.

"We will always work with those that wish to demonstrate lawfully, as the majority of protestors did," said senior police officer Mark Bird. "However, we will not tolerate the small minority that offer violence or commit other criminal acts, such as that witnessed outside Westfield," he added.

A wave of mass demonstrations across the US arose from grand jury decisions in New York and Ferguson not to bring charges against white police officers responsible for the deaths of two black men - Eric Garner and Michael Brown.

Eric Garner died on July 17, 2014 after a police officer choked him to death in an attempt to pull the unarmed man, who was resisting arrest on suspicion of selling untaxed cigarettes, down to the ground, according to Bloomberg. Another policeman shot Michael Brown in Ferguson, Missouri, on August 9, 2014. The police officer claimed that he had to open fire after a struggle in the patrol car, as Brown allegedly tried to take out his weapon. Some witnesses, however, said that the man had his hands up and was unarmed.

PHOTO: "A Storm Is Coming" - At #EricGarner protest tonight in Berkeley @GabrielleCanon via @HarryElephante pic.twitter.com/afmt90UK3r